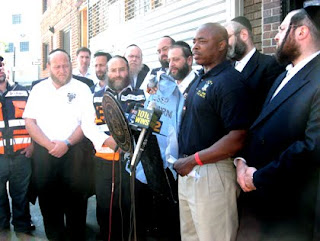 On Monday, Adams announced the purchase of five bulletproof vests for the Brooklyn South Safety Patrol better known as the Boro Park Shomrim.

The Shomrim is a licensed, unarmed community group that works with police to keep order in several Brooklyn neighborhoods.

The vests are expected to provide an addition layer of protection for the group’s members as they try to keep the community safe.

The area has seen two separate shooting incidents recently – the most recent resulting in gunshot injuries to four members last week after the group went after a man they suspected was exposing himself to young children.

Adams is paying for the vests out of his own pocket, 1010 WINS’ Juliet Papa reported.

Adams said other lawmakers should provide citizen patrols with the same and called them the “eyes and ears” of their neighborhoods
Posted by joe levin at 6:22 PM