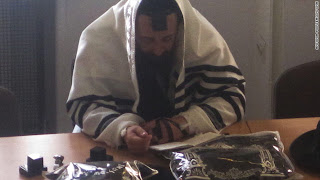 Warsaw, Poland (CNN) -- Pawel sits in the synagogue learning the Torah, praying and getting advice from his rabbi.

He appears to be enjoying a happy life married to his childhood sweetheart and the mother of his two children.

But he and Ola have traveled further than most -- from hate-filled neo-Nazism through the shock and anger of learning their heritage was Jewish to taking their place in the synagogue as Orthodox Jews.

They met at school in Poland's capital, Warsaw, when they were 12, but as their teen years passed Pawel first and then Ola grew into the neo-Nazi scene.

Gallery: Poles rediscover Jewish heritage At 18 they married and a few years later Ola was nagged by a conversation with her mother that she barely remembered -- something about Jewish roots.

She found her answer at the Jewish Historical Institute, which says it has collections documenting 10 centuries of Jewish experience in Poland.

While there she said she felt compelled to also check Pawel's family history -- and he too came from a Jewish background.

"Something told me to... It was unbelievable -- it turned out that we had Jewish roots. It was a shock. I didn't expect to find out that I had a Jewish husband," she said.

"I didn't know how to tell him. I loved him even if he was a punk or skinhead, if he beat people up or not. It was a time in Poland when this movement was very intense."

Reeling from the news, she had to return home to her neo-Nazi husband and tell him of their Jewish heritage.

There were 350,000 Jews in Poland after World War II -- about 10 percent of the Jewish population before the war.

In the 25 years after WWII ended the overwhelming majority left to escape persecution by the Soviet-controlled government.

For those who stayed, their Jewish heritage was hidden often even from their own children.

It provided a culture where anti-Semitism could thrive and in 1980s Poland, Pawel was embracing the hate festering in the concrete tower blocks of Warsaw.

When Ola brought home the documents to show Pawel his own history, he rushed to confront his parents, and they told him the family secret.

"I was a nationalist 100 percent. Back then when we were skinheads it was all about white power and I believed Poland was only for Poles. That Jews were the biggest plague and the worst evil of this world. At least in Poland it was thought this way as at the time anything that was bad was the fault of the Jews..." he said.

Over time, Pawel's anger and confusion subsided and he approached Chief Rabbi of Poland Michael Schudrich.

Speaking in the synagogue where he now worships, Pawel said: "The mirror was a big problem. I couldn't look at myself. I saw a Jew. I hated the person in the mirror then I grew accustomed to it, came to terms with it somehow.

"I came here to the rabbi and said, "listen, they are telling me I'm a Jew, I have this document in my hand, my mom and dad have said something. Who is this Jew and what is it? Help me because I am going to lose my mind otherwise.'"

In the years that followed they became friends with the chief rabbi and he has been a mentor to them.

Today, they're active members of the Jewish community in Warsaw. Pawel is studying to work in a slaughterhouse killing animals according to the Jewish Kosher requirement and Ola is working in the synagogue's kitchen as a kosher supervisor."

"I think also it says on a personal level, never write somebody off. Where they may be 10 years ago doesn't have to be where they are today. And the human being has this unlimited capability of changing and sometimes even for the better."
Posted by joe levin at 8:55 PM