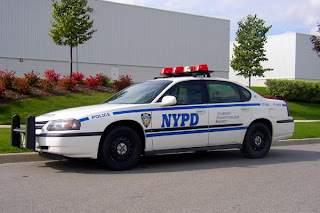 Did Brooklyn police ignore a citizen’s complaint about a flasher who ended up shooting four members of an Orthodox Jewish volunteer patrol?

That’s the charge reported in Hamodia, a Borough Park newspaper whose name means “Notifier” in Hebrew, and which calls itself “The Daily Newspaper of Torah Jewry.”

The paper also says that the 66th Precinct commander, Deputy Inspector John Sprague, is taking personal command of a police investigation to determine whether, or why, no report was filed.

Police said that, on Sept 2, members of the Shomrim volunteer patrol, which is licensed and unarmed, and which has been patrolling Hasidic neighborhoods for two decades, were tailing the suspect, 33-year-old David Flores, after they received a report of a man exposing himself to children.

At about 8 p.m., the Shomrim guys saw Flores get out of his car. Then they chased him, and tried to disarm him. Flores, who has nine prior arrests, then began firing, hitting four Shomrim members at 49th Street and 10th Avenue in Borough Park. Two were hit in their hands, one in his neck, a fourth in his abdomen, police said.

None of the injuries was life-threatening. The four were treated at Lutheran Medical Center, where a large contingent of police — including Police Commissioner Ray Kelly — appeared.

Well, guess what? According to Hamodia, a week before the shooting, a Borough Park woman told a 66th precinct police officer that she and others witnessed a man matching Flores’s description exposing himself outside her house on both Aug. 25 and 26.

The woman, Faigie Friedman, said she had alerted the Shomrim patrol, and later spoke to a police officer who responded to her home. She gave that cop a description of the suspect, his car, and its license plate number.

The NYPD appeared to confirm that no report was filed.

An email from its Public Information Office to Hamodia, reads: “Officers from the 66th precinct responded to a 911 call to that location on Aug 26th. Police are investigating whether a report was made.”

Flores, meanwhile, has been charged with assault, criminal possession and use of a firearm, reckless endangerment and menacing — but not with the sexual offenses that Friedman allegedly witnessed and reported to police.

Now, if all of this is true, it serves as yet another example of police refusing to take crime complaints — yet another sign that this abuse is not confined to the 81st precinct, as described by whistle-blower cop Adrian Schoolcraft.

What Inspector Sprague’s involvement means, though, is unclear. Does it portend an honest investigation or another police cover up?

Remember, these allegations of police refusing to take crime complaints have been around long before Schoolcraft turned up with his tape-recordings of 81st precinct roll calls, where police supervisors ordered cops to downgrade felonies to misdemeanors and to refuse to take civilians’ crime complaints.

In every case, Police Commissioner Ray Kelly and Mayor Michael Bloomberg have stonewalled attempts to discover what is going on inside the NYPD that has led to this mess.

Now here’s a case that goes beyond what the mainstream media seems to be treating merely as administrative corruption.

Here in the 66th precinct, the department’s alleged failure to take a civilian’s crime complaint and file a report has had real — and tragic — consequences.

Or, as a source in Borough Park said, when describing how police treat civilians asking for help: “When people do everything right, and want to report a crime, the police challenge them immediately. There is a court case on the street, and it is repeated hundreds of times.”
Posted by joe levin at 6:43 AM