POLICE WHISTLE: A doomed Jennifer Hawke-Petit (above) tells bank manager Mary Lyons that her family is being held hostage. She had minutes earlier asked a teller to call 911. She later leaves with ransom cash. 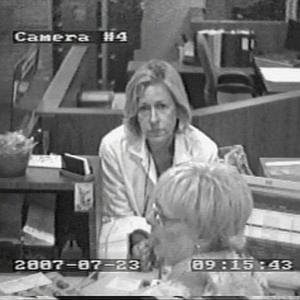 Teller's urgent bid to save lives

NEW HAVEN, Conn. -- She was desperately trying to save her family. And maybe she could have, had cops only acted more quickly.

Newly released video shows an astonishingly calm Connecticut mom Jennifer Hawke-Petit as she withdrew a $15,000 cash ransom from her bank, clearly and carefully informing the teller that men are holding her husband and daughters hostage back home, threatening to kill them all.

But cops in wealthy Cheshire, Conn., failed to immediately chase Hawke-Petit's car -- despite getting a description and the direction it was headed from the teller, according to shocking testimony yesterday.

They wasted more than half an hour assessing the situation and setting up a vehicle perimeter -- time the two attackers used to strangle the mother in her living room and set the gasoline-fueled fire that claimed the lives of the two girls upstairs.

Worst of all, throughout that half-hour of watching and waiting, fire vehicles were not called to the scene as a precaution, leaving cops to fight the sudden inferno at first alone, without gear -- using just a garden hose.

That late action didn't come until a police radio dispatch at 9:54 a.m. indicated someone -- Dr. William Petit Jr., as it turns out -- was calling out for help in the invaded home's back yard. Petit, the sole survivor of the invasion, had broken free from the basement, and -- bleeding profusely from blows to the head, and with his ankles still bound -- had rolled his body across two yards to summon help.

It was at this moment, town police Capt. Robert Vignola testified in New Haven Superior Court yesterday, that Steven Hayes and Joshua Komisarjevsky, 29, peeled out of the driveway in Hawke-Petit's SUV. Inside, fire began to sweep through the house -- fueled, prosecutors say, by gasoline sprayed through the living room.

Only after the two accused killers crashed the SUV into a police cruiser one block away, and a plume of smoke began to rise from the rear of the home, did Vignola call the fire department, according to his testimony.

By the time firetrucks arrived, a full 40 minutes had elapsed since the valiant mother stood before the bank teller, composedly telling her tale of horror.

Her body by then lay raped, strangled and charred beyond recognition, barely distinguishable from the family room couch it was propped against, according to crime scene photos so graphic, they brought five jurors, men and women, to tears yesterday.

The revelations -- which suggest the family could have been saved -- came on day three of Hayes's capital murder trial, charged as one of the two monsters who launched a reign of terror against the Petit family on a Monday morning three years ago.

Asked, during cross-examination by public defender Thomas Ullman, why so little was apparently done, Vignola noted that there were no external signs of violence at the home, and that there had been initial "confusion" over what was even going on.

"But the bank manager had said [to police] that Mrs. Petit was petrified?" asked the defense lawyer.

"That's correct," the captain conceded. But police were following state protocol, he insisted.

"It's been our training in Connecticut since 2001," he said. "We were building on information we had. There was no violence. The information from the start was very confusing. I was establishing a rescue team."

"Michaela was lying on the bed -- her hands were bound with, like, string or rope, and they were over her head," Markella testified of finding the younger girl's body. The cop demonstrated with his hands, holding them as if bound together, fist to fist.

As the cop held his fists to his face, as if cowering, Dr. Petit began to rock and sob in his front-row seat, the only emotion the stolid, grieving widower has displayed during the trial.

Testimony in the heartbreaking case continues today.
Posted by joe levin at 8:22 AM