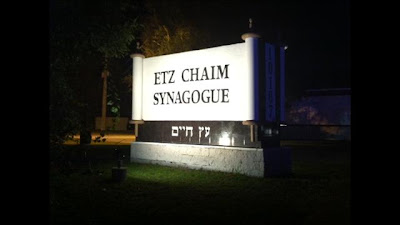 A woman is dead and her daughter is at University of Florida Health hospital in Jacksonville after both were hit by a car Friday night while crossing the street on San Jose Boulevard to attend a Yom Kippur service at a synagogue in Mandarin.

Esther Benzohar Ohayon, 57, of Jacksonville was pronounced dead on the scene.

Ohayon and her daughter Orly, 16, were crossing the street at Haley Road when a Toyota Camry traveling southbound hit them, according to authorities.

Michael Fortunato, of Jacksonville, was listed as the driver of the Camry, according to Florida Highway Patrol documents.

Fortunato was detained at the scene. FHP officials are still investigating to determine whether he ran a red light or was under the influence of alcohol, Bryan said.

Rabbi Yaakov Fisch, of Etz Chaim Synagogue, where Ohayon and her daughter were headed at the time of the accident ,

“She was a very refined and kind-hearted woman,” Fisch said. He said her family plans to fly her body to Israel to be buried next to her husband.

Fisch said Orly Ohayon is expected to recover after undergoing surgery. He said Esther Ohayon was a member of the Chabad-Lubavitch Synagogue on Haley Road.

Rabbi Joshua Lief, of the Congregation Ahavath Chesed Synagogue, said he knows Ohayon and her daughter and that the entire Jewish community is feeling the accident’s impact.

“The reality is that we here in Jacksonville are a very small and close-knit Jewish community, and we are all devastated by this terrible loss,” he said.

Fisch also noted the danger of the San Jose and Haley intersection, particular for the Orthodox Jewish faithful who on the Sabbath can not push the button to activate the pedestrian signal for crossing the street.

There have been “very harrowing and near misses over the years,” Fisch said.

He said he reached out to Rep. Charles McBurney, R-Jacksonville, about three months ago asking if the intersection can be set to provide longer times to cross the street during the Sabbath.

“I hate to say that I never even got a reply from Mr. McBurney,” Fisch said. “Not even a ‘I’m working on it’ or anything.”

Fisch said a longer time period to cross San Jose on the Sabbath could help to make it safer for those attending services.

Mitzmacher said he taught Orly Ohayan and she is “as sweet and sincere as the day is long.”


“All we can do now,” Mitzmacher said, “is pray for Orly’s recovery and pledge our part to see Esther be a memory everlasting.”