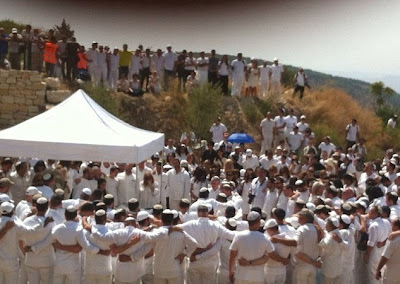 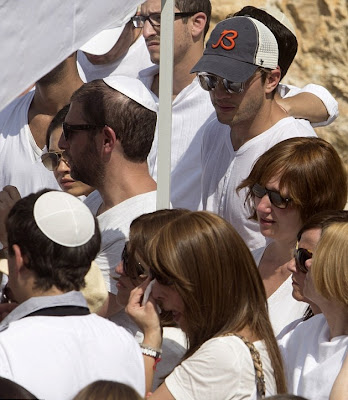 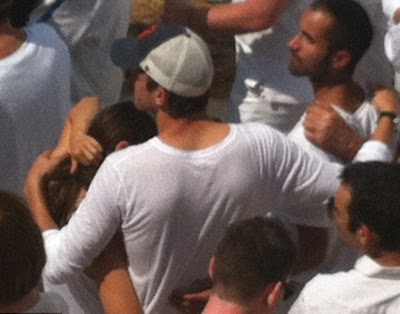 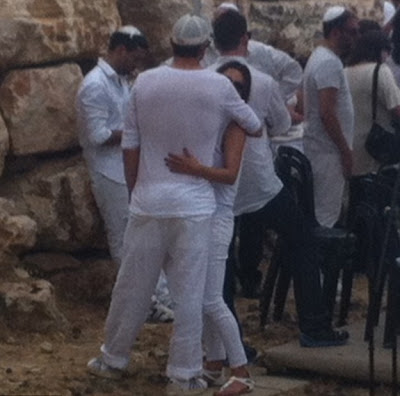 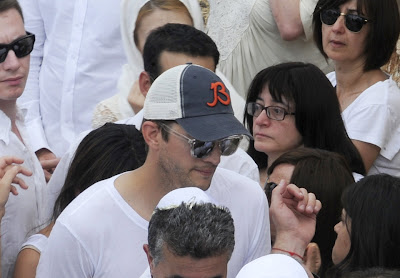 Rabbi Philip Berg, the founder of the Los Angeles-based Kabbalah Center, whose death was announced on Monday, was buried Wednesday at a cemetery in the northern Israeli city of Safed, a place that has been associated for centuries with Kabbalah, Jewish mysticism.

Berg, 86, attracted a large number of followers to Kabbalah, among them American celebrities including Madonna, Britney Spears and Ashton Kutcher. Kutcher and his girlfriend Mila Kunis were among those who attended the funeral. Berg was buried in a large mausoleum commissioned several years ago as his gravesite.

The mourners at his funeral conducted themselves in solemn silence. Following the eulogies, the crowd embraced in a row and quietly sang, swaying from side to side, reciting "Ani Ma'amin,” a Hebrew expression of faith in the coming of the Messiah. The recitation then tapered off into silent prayer.

Berg was buried in a large tomb in the city's new cemetery, which is near the old burial ground, the site of the graves of leading figures of the Kabbalah movement including the 16th century rabbis Isaac Luria, Shlomo Alkabetz and Yosef Caro. Luria is regarded as a founder of contemporary Kabbalah and Caro was the author of the Shulhan Aruch, an authoritative religious code of Jewish conduct.

Hundreds attended Berg's funeral Wednesday, including a number of people who came from abroad to pay their respects at the elaborate ceremony. The funeral was broadcast on live streaming video on the Kabbalah Center's website. The mourners dressed in white, and an espresso stand and cold drinks were served at the site by a catering firm. Dozens of security personnel circulated among those in attendance, a Magen David Adom emergency first aid van was stationed nearby and medical personnel were on standby.

Berg was buried inside a tomb that was built about four years ago on about half a dunam (about an eighth of an acre) of grounds, providing space for about 35 burial plots. Residents of Safed did not know until Tuesday that it was in fact a burial site for Berg, which is much more prominent than the modest graves surrounding it. The mausoleum, which features two assembly halls, took several months to build. The entrance to the tomb is equipped with an iron gate and is closed to the general public.

The cost of the land on which the tomb was built was estimated four years ago at upwards of NIS 700,000 and the cost of the structureon the site is thought to have involved hundreds of thousands of shekels more.

Toronto resident Terry Samuels, who came to Israel for the funeral said that he did so because Rabbi Berg was a kind of spiritual teacher for him, performing miracles and supporting him during difficult times. Samuels said Berg enabled him to find meaning in life. Hundreds of others came to the funeral from the United States and Canada as well, Samuels noted.

He also mentioned the significance of the location of Berg's grave near the grave sites of the major 16th century figures of the Kabbalah movement. There was something very special about the site, the Canadian said, adding that Berg had studied the writings of Rabbi Isaac Luria and had brought knowledge of Kabbalah to the world.

A woman from Jerusalem who identified herself as Shulamit said she had been a follower of Berg's for 45 years. "He was a modest, friendly man who sought peace. He believed in people for who they were, without distinction as to race, religion or gender," she said. "The rabbi influenced my life. My life changed. I learned to let go of things, not to get angry, and to help others. I learned to forgive anyone." A woman named Yael from the center of the country said Rabbi Berg was "like a father" to her.

For his part, Samuels said there is no one who can fill Berg's shoes and the future is now dependent on his followers individually. He said they would now have to work harder to bring the knowledge of kabbalah to humanity.
Posted by joe levin at 5:10 PM