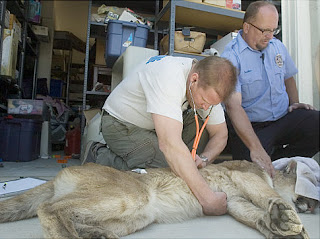 A California couple had the fright of their lives when they went to chase what they thought was a raccoon out of their garage and instead came face-to-face with a mountain lion.

Michelle Taylor heard something banging around in the garage behind her San Bernardino house Tuesday morning and thought some small critter had found its way inside, The Victorville Daily Press reported.

But when her husband, Jesse, went into the building, he spotted a large paw and set of glowing eyes peering out at him from the shadows and beat a hasty retreat.

She called 911 and officials with the California Fish & Game division arrived and hit the young male cougar with a tranquilizer dart.

It was examined and then released into San Bernardino National Forest.
Posted by joe levin at 8:38 PM