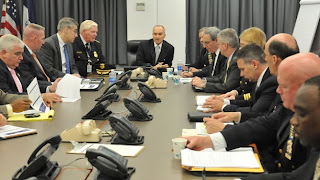 Police Commissioner Ray Kelly warned transit and law enforcement officials Tuesday that they still must be extra vigilant along rail lines after documents were uncovered at Osama bin Laden's compound discussing train attacks on the 9/11 anniversary.

Kelly spoke to the Northeast Corridor Coalition on Tuesday, a group of police and transit agencies that was established in 2005 to facilitate security planning along the Amtrak rail line between New York and Washington.

"Among the wealth of data recovered from the compound in Pakistan were handwritten notes proposing to derail a train on the 10th anniversary of 9/11, or on another significant date," Kelly said. "We have to be prepared to defend against every type of attack imaginable."

After bin Laden's death on May 1, the NYPD directed its members to remain alert for suspicious packages and possible threats. The police presence was also increased in the subway system.

Days later, federal officials sent an advisory ordering law enforcement and transportation officials to be vigilant about train security, based on the information recovered at the terror mastermind's compound after his death.

Al-Qaida also issued a statement after bin Laden's death, pledging to "pursue the Americans and their agents both inside and outside their country, and soon, with the help of Allah."
Posted by joe levin at 7:47 AM