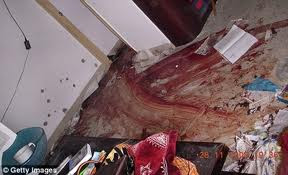 An officer in Pakistan's intelligence service chose a Jewish center as a target for the 2008 Mumbai attacks and then helped launch a new plot against Denmark, according to the star witness in a terror trial in Chicago.

In his second day of testimony, David Coleman Headley, a confessed Pakistani-American terrorist, revealed more details about close ties between Pakistan's Inter-Services Intelligence Directorate (ISI) and the Lashkar-i-Taiba terror group, which allegedly carried out the attacks that killed 166 people, including six Americans.

Headley said his ISI handler, a man known only as Major Iqbal, made key decisions and was a mastermind of the plot along with Lashkar chiefs. Major Iqbal deployed him on the last of five reconnaissance missions in India to scout targets that Iqbal said would definitely include the Chabad House, a Jewish community center where gunmen later killed three American rabbis, Headley testified. The pregnant wife of one of the rabbis was also killed.

"Major Iqbal told me the Chabad House would be added on whatever list [of targets] there was because it was a front office for the Mossad," Israel's intelligence agency, Headley said. He added that Major Iqbal "seemed upset the [Mumbai] airport was not included" as a target.

Nothing suggests that the claim about the Mossad was true.

Headley described in understated tones how terrorist leaders congratulated him for his work casing luxury hotels and other targets chosen to ensure Americans and Jews would die. Asked his reaction to the three-day televised slaughter, he responded: "I was pleased."

The 50-year-old businessman has pleaded guilty to conducting months of crucial reconnaissance in Mumbai and for the Denmark plot. He is the star witness in the trial of his accused accomplice, Tahawwur Rana, in Chicago federal court. U.S. prosecutors have also indicted Major Iqbal and three Lashkar chiefs, all but one of whom remain fugitives.

Pakistani officials deny any links to terrorism. They say Headley's allegations are not credible because of his past as a drug dealer and DEA informant.

But the slaying of Osama bin Laden in a Pakistani military town has worsened longtime suspicions of Pakistan and the stakes are high in a case built largely on a witness with an admitted pattern of duplicity. The damage to the U.S.-Pakistani relationship could be profound if the trial produces powerful evidence that Pakistani officers took part in a plot to kill Americans.

"A lot of explanatory power has been put in the hands of David Headley, an undoubtedly flawed individual," said Stephen Tankel, author of a forthcoming book Storming the World Stage: the Story of Lashkar-e-Taiba. "The US government clearly has confidence in Headley's testimony and has been able to support it with strong evidence related to his communications with men he asserts were ISI officers....It will be interesting to see if the prosecution introduces further evidence independent of Headley that these men were in the ISI, as that would seal an already strong case for official involvement at some level."

On Tuesday prosecutors presented details about the apparent involvement of serving intelligence officers. Headley testified that Major Iqbal and Lashkar used him as a shared operative as he tried to infiltrate Shiv Sena, a right-wing Hindu political party in India.

An email from Major Iqbal to Headley showed the officer trying to balance the twin missions of collecting military intelligence and developing terrorist targets. Asked by Headley if he should try to cultivate a Shiv Sena public relations official he had befriended, Iqbal responded that he was not sure if the potential Indian source would be productive for espionage, but said he might still be worth pursuing for Lashkar, which he called "your organization."

"What all advantages can we get from this person except strengthening our cover," Iqbal wrote. "Will this all be generating worthwhile information related to military or forces...If he is of any use to your organization, you are at liberty to handle even without my information or as you desire."

The testimony Tuesday also indicated that Iqbal was at least aware of a terrorist plot to strike the heart of Europe. Headley described a meeting in late 2008 in which Iqbal and Sajid Mir, his Lashkar handler, came together to his house in Lahore for the first time. Until then, the two had coordinated the American's missions in tandem but separately.

During the sit-down, Mir told Headley he would be sent to Denmark to scout for an attack on the Jyllands Posten newspaper, which had enraged Muslims by printing cartoons of the Prophet Mohamed.

"We were all angry about it," Headley testified. "Major Iqbal said he was surprised such an attack had not taken place already."

Headley went to Denmark in January 2009, posing as an immigration consultant in visits to newspaper advertising representatives in Copenhagen and Aarhus. Two months later, however, Lashkar put the Denmark plot on hold. Major Iqbal cut off contact with Headley, instructing him to lay low because Pakistani authorities had put heat on Lashkar after the Mumbai attacks.

Soon, another ISI officer named Major Sameer Ali contacted Headley to try to recruit him for new operations and remained in touch with him until at least August, according to Headley's testimony and e-mails between the two presented in court. The mention of Major Ali in the trial brings the number of ISI officers Headley has described meeting to at least six, according to testimony and a report on Headley's interrogation by Indian investigators.

Headley met with Ali and a Colonel Shah in the ISI that April in Lahore, according to investigators, though that information was not presented in court Tuesday.

By then, however, Headley had shifted allegiance to al Qaeda and away from the ISI, urged on by a friend and former Pakistani military officer known as Pasha who had left Lashkar for al Qaeda.

"He said they were conducting the ISI's jihad and we should conduct God's jihad," Headley said.

When Pasha was arrested by the ISI a few months later, Headley wrote to Major Ali inquiring about his friend's fate, according to testimony. Headley said Pasha had once worked with a colonel in the ISI, which he referred to in an e-mail as "your department." Major Ali responded on August 4, 2009 to inform him of the release of the al Qaeda operative, who remains a fugitive indicted in the Chicago case.

"Your friend that u asked about has reached home," Major Ali reassured Headley.

Even if the trial paints a convincing portrait of ties between ISI officers and terrorists, the analysis must be careful and measured, experts say.

"To date there is no evidence the ISI leadership was aware of the Mumbai attacks, or at least of their scope and scale, which suggests Major Iqbal and possibly others were acting without sanction," Tankel said. "Whether they were given excessive autonomy or were engaging in outright rogue behavior is a very important question and it will be interesting to see if the trial provides an answer."
Posted by joe levin at 8:57 PM