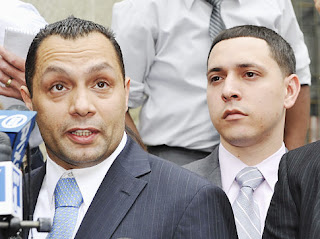 The NYPD fired two Manhattan cops Thursday just hours after they were acquitted of raping a helpless East Village woman.

Officers Kenneth Moreno and Franklin Mata were given the boot because the jury convicted them of official misconduct for going back to the woman's apartment three times without telling their superiors.

"The guilty verdict reached today involved a violation of the officer's oath of office and merits immediate termination," Police Commissioner Raymond Kelly said. "Both officers will be terminated today."

Both cops face up to two years in prison on the misdemeanor charges when they are sentenced June 28.

Kelly lowered the boom after a relieved Moreno branded the now 29-year-old accuser a liar.

PHOTOS: Reaction from the courtroom
"I thought she made the whole thing up," Moreno said moments after he and Mata were found not guilty of rape charges that could have sent them to jail for up to 25 years.

Moreno said prosecutors should have dropped the case when they found no DNA to link him to the woman.

"It didn't end with the DNA not being found," he said bitterly. "They just continued their investigation. It was just a roller coaster."

That said, Moreno says he bears the accuser no ill will.

"I hope everything works out for her," he said. "I wish her no harm."

Moreno also had a warning for other NYPD officers when dealing with drunk women.

Mata said he was "glad this was finally over."

"I want to finally get on with my life," he said. "I've been innocent from day one."

Moreno's lawyer, Joseph Tacopina, who took some heat for calling his client a "simpleton" in closing arguments, hailed the verdict as "justice."

The jury placed little faith in what prosecutors thought was their best evidence - a secret recording in which Moreno seemingly admits to the rape, he said.

"He said on that tape 24 times that he did not have sex with that woman," Tacopina said.

Juror Melinda Hernandez said it was "not at all" easy to reach their verdict.

"It's been an emotionally trying time," she told The Daily News. "I just want to be with my family right now. We are all emotionally upset about the thing."

Manhattan District Attorney Cyrus Vance said that while he respects the jury's verdict, "the defendants' actions that night not only violated the law, they violated the victim's rights, and the public's trust."

The verdict came after seven days of deliberations - and capped a six-week trial in which prosecutor Coleen Balbert said Moreno sexually assaulted the woman while Mata stood watch.

Both officers looked stunned when the verdict was announced at 10:45 a.m. and their families began weeping tears of joy.

Moreno, 43, and Mata, 29, also skated on three second-degree burglary counts for taking the woman's keys and returning to her apartment three times.

During the trial, Balbert said Moreno and Mata "disgraced their profession" by taking advantage of a woman who was drunk and vomiting when they encountered her.

Balbert ridiculed Moreno's claims that the almost completely naked woman tried to seduce him - and that he just spooned with her while dressed in his uniform. She was especially galled by Moreno's cringe-worthy insistence that he doesn't "kiss and tell."

Tacopina and Mata's lawyer, Edward Mandery called the accuser a gold digger who is suing the city for $57 million.

They said the fashion executive was too bombed to remember what really happened - and that there is no DNA backing her claim that she "woke up to being penetrated from behind."
Posted by joe levin at 7:01 PM