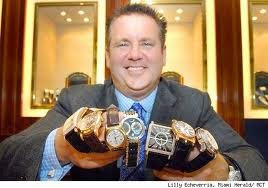 FORT LAUDERDALE, Fla. -- Four more people were charged Friday for their alleged roles in a $1.2 billion Ponzi scheme orchestrated by disbarred attorney Scott Rothstein, and investigators said they're not done yet.

"One thing is clear: Rothstein was able to deceive investors because of the participation of others," said John Gillies, special agent in charge of the FBI's Miami office. "We will shine a light on every aspect of this fraud."

Those charged Friday include a pair of information technology employees at Rothstein's now-defunct law firm, an attorney who also worked at the firm, and a Rothstein associate who allegedly posed as both a banker and as a client represented by the firm. The Ponzi scheme revolved around luring people to invest in apparently lucrative legal settlements that were actually phony.

Each of the four is charged with wire fraud conspiracy, which carries a maximum five-year prison sentence. But the type of document filed by prosecutors typically indicates that the defendants will eventually plead guilty in hopes of getting a lesser sentence.

Prosecutor Jeffrey Kaplan said in court Friday that the cases could be resolved in a few weeks. Attorney Alvin Entin, who represents William Corte, one of the four charged Friday, said his client and the others will plead guilty.

"It may have been defensible" at trial, Entin said, "but it was definitely not worth the risk."

Corte, 38, and Stephen Caputi, 53, appeared at a brief hearing Friday and were ordered released on $100,000 bail each. The other two defendants, attorney Howard Kusnick, 58, and former Rothstein Rosenfeldt Adler employee Curtis Renie, 38, are expected to surrender to authorities next week.

Prosecutors said Corte and Renie used their IT skills to create a fake Internet page that appeared similar to TD Bank's legitimate Web page. The pair allegedly posted false account balances so that investors were tricked into thinking their funds were sound; in one case, they made it appear that the firm had up to $1.1 billion in deposits at the bank that did not exist.

Kusnick was charged with writing a letter that appeared to settle a lawsuit in favor of two of the Rothstein firm's clients. There was no such litigation or settlement, and prosecutors said the purpose was to make the clients think their money was being used for a lawsuit - when it was actually going to pay off other investors in classic Ponzi scheme fashion.

Kusnick did not immediately respond Friday to an e-mail seeking comment.

Caputi's role, prosecutors said, was sometimes to act as a banker to assure investors that Rothstein's accounts were sound. Other times he pretended to be a lawsuit plaintiff, court documents say, including one occasion when he told potential investors he had recently settled a case for $10 million.

Rothstein, 48, pleaded guilty last year to five federal fraud charges and was sentenced to 50 years in prison. Authorities have been selling off his fancy houses, exotic cars, yachts and other assets to repay some of the money lost by hundreds of investors.

Rothstein's chief operating officer at the law firm, 43-year-old Debra Villegas, is the only other person charged so far. She pleaded guilty to money-laundering conspiracy and is serving a 10-year prison sentence, but may get that term reduced through cooperation in the Ponzi investigation.
Posted by joe levin at 10:34 PM