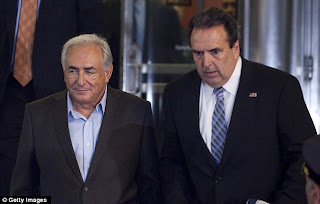 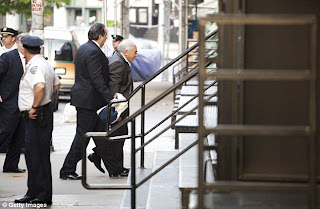 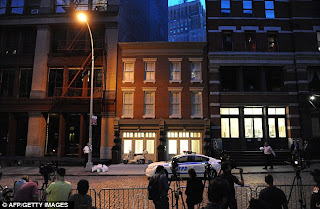 Dominique Strauss-Kahn moved into a $14 million Tribeca pad on Wednesday night - the kind of place that could make an accused sex predator forget he's under house arrest.

The new digs are at 153 Franklin St. on a cobblestone road in the heart of Robert De Niro territory.

"He must really be suffering in there with the spa and private theater," said Annette Goodman, rolling her eyes. "It's the height of hypocrisy. House arrest does not mean a luxury townhouse."

"Please, God, no," said Linda Buongermino. "They should have found a place for him in jail. This will disrupt all our lives."

Strauss-Kahn's new luxe digs - Nobu Next Door is just around the corner - are a far cry from his Rikers Island cell and the prison's notoriously humdrum fare, including plates of ground turkey and battered fish and cabbage.

And Wednesday night, the disgraced French politician dug right in. He and his wife, journalist Anne Sinclair, ordered $242.790 worth of steaks and salad from upscale Landmarc.

The bill was put on 26-year-old daughter Camille's credit card, and deliveryman Ramon Leal walked away with a handsome $25 tip.

The 27-foot-wide townhouse recently caught the eye of house-hunting Alex Rodriguez and gal pal Cameron Diaz - and no wonder.

The ground floor is radiant-heated limestone. The bathroom is the size of some Manhattan studio apartments and is outfitted with a "rainfall steam shower."

The skylight in the great room looks out on the terrace, which is surrounded by a frosted glass fence for privacy.

Owner Michael Marvisi declined to comment, as did his lawyers Robert Marcus and Seymour Magier.

But architect Leopoldo Rosati appeared unfazed by the news. "Sounds good," Rosati said. "I'm sure that he will love the place."

Strauss-Kahn, 62, who was placed on house arrest after being indicted on charges he tried to rape a hotel maid, was whisked to his new "cell" about 7:30 on Wednesday night.

Smirking in a gray suit with no tie, he ignored questions from reporters as two security guards escorted him out of 71 Broadway in lower Manhattan - where he stayed for six days after being sprung from Rikers Island.

He was having trouble finding a more permanent location where he can be locked down under armed guard and around-the-clock surveillance until his trial.

The first floor boasts a guest suite with bath and private entrance, a Boffi kitchen with Miele and Gaggenau appliances and a massive room with a skylight and fireplace.

One floor up are two bedrooms with custom closets, a limestone bath with a Duravit jet tub and waterfall shower and the landscaped terrace.

The master suite sits on the top floor with a wet bar, his-and-her walk-in closets and a second limestone bath.

Before he pulled up stakes on Broadway, the former International Monetary Fund leader was suffering from a bit of ennui, his lawyer said.

Strauss-Kahn faces a seven-count indictment for his May 14 encounter with a 32-year-old maid inside the Sofitel New York hotel on W. 44th St.

Once considered a front-runner for the French presidency, he's spending $200,000 a month on security on top of $1 million bail and a $6 million bond.
Posted by joe levin at 6:39 AM