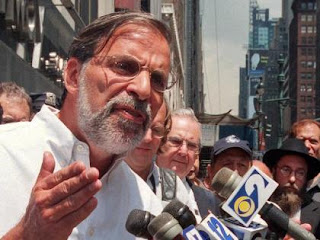 NEW YORK — A proposal to rename a street in the Borough Park section of Brooklyn in honor of a longtime Italian community activist has run into a roadblock.

A street sign in Borough Park was on the verge of being renamed for Zachary Sansone, a founder of the Congress of Italian American Organizations, which he started with his wife, Mary. Zachary Sansone passed away last year. The sign was about to be approved for renaming, but then some questioned Zachary Sansone’s military service.

“I think we don’t have enough information as to what Mr. Sansone’s role was in the fascist Italian army during the second World War. And pending that information, I think this matter should be held in abeyance,” Rabbi Chaim Israel said.

Rabbi Israel and Assemblyman Dov Hikind objected to Community Board 12, about renaming 59th Street between 14th and 15th avenues until more could be learned about Sansone’s time with the Italian army.

Mary Sansone said her husband went to Italy when he was 12 and was drafted into the army. She said as an American citizen, he went to the American consulate to object — but was denied.

“Oh, he was against Mussolini! He had no choice!” Mary Sansone said.

“But we also know that he made it up to first lieutenant,” Rabbi Israel responded.

“No, no! The reason why he was first lieutenant is because he was a lawyer, and when you get drafted, you go according to your rank!” she said.

As for Zachary Sansone’s decades of community service, Rabbi Israel stopped short of downplaying all that he did for the area.

“Well he’s a very fine human being. He really was. And he deserves honors. The question is do we name an American street for him? That’s all,” Rabbi Israel said.

Mary Sansone said she is confident that the street will be renamed for her husband.

Community Board 12 put off the vote to rename the street for Zachary Sansone until the end of June.
Posted by joe levin at 6:50 AM