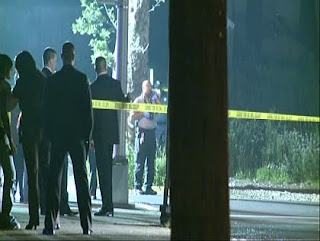 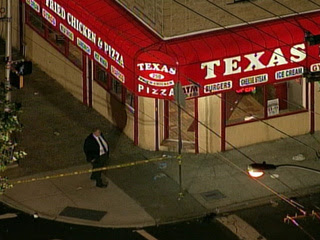 The off-duty Newark police offer who was shot in a 'drive-by' while eating pizza died Friday morning, according to the Essex County Prosecutor's Office.

The officer was ordering pizza at the Texas Fried Chicken and Pizza in the South Ward when he was hit just before 10 p.m. Thursday.

Medics rushed the 45-year-old officer to University of Medicine and Dentistry, New Jersey.

The other victims were taken to the hospital in stable condition, according to Mayor Booker.

Anyone with information about the shootings is encouraged to contact the Newark Police Department, 877-NWK-TIPS (8477).

A $10,000 reward is being offered for information leading to the arrest of the shooter.
Posted by joe levin at 7:15 AM