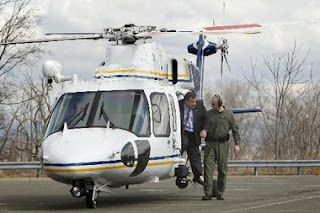 Gov. Chris Christie arrived at his son's baseball game this afternoon aboard a State Police helicopter.

Right before the lineup cards were being exchanged on the field, a noise from above distracted the spectators as the 55-foot long helicopter buzzed over trees in left field, circled the outfield and landed in an adjacent football field. Christie disembarked from the helicopter and got into a black car with tinted windows that drove him about a 100 yards to the baseball field.

During the 5th inning, Christie and First Lady Mary Pat Christie got into the car, rode back to the helicopter and left the game. During a pitching change, play was stopped for a couple of minutes while the helicopter took off.

Christie's eldest son, Andrew, was the starting catcher for Delbarton High School, in Morris Township. The governor played the same position of catcher when he was in high school.

The game was being held at St. Joseph Regional High School in Montvale in Bergen County. Christie watched the game from the stands, flanked by State Police security guards.

"It is a means of transportation that is occasionally used as the schedule demands," said Christie spokesman Michael Drewniak in an email. "This has historically been the case in prior administrations as well, and we continue to be judicious in limiting its use."

The governor had no public events on his schedule, offering no insight to where he might have been traveling from. He had a private meeting at 6:30 p.m. at Drumthwacket, the governor's mansion, in Princeton. He is meeting with a group of Iowa donors who have publically expressed a desire to persuade him to run for president in 2012.

Christie was ferried to the field in a brand-new AugustaWestland helicopter, purchased at a cost to taxpayers of $12.5 million.

The helicopters, which can reach nearly 200 miles per hour with its twin turbo-shaft engines, are designed for homeland security duties and transporting critically injured patients.
Posted by joe levin at 10:22 PM