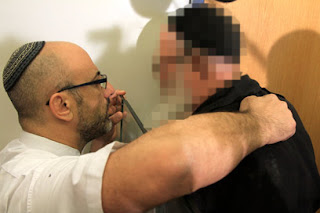 Rabbis name and community remain under gag order; police say at least three charges of molestation have been uncovered so far.

A popular rabbi from a community in the north of Israel was arrested for allegedly molesting minors, it was revealed on Friday after a gag order on the case was lifted.

The rabbi, age 60, was arrested on Thursday after he requested to leave the country for a celebration of a famous rabbi. The rabbi's name and certain details about the case are still under a gag order.

The rabbi is suspected of sodomizing a fourteen-year-old girl three years ago, as well as molesting additional minors, both male and female, over the course of this past year.

Police have been investigating this case for the last several months. The investigation has been headed by police-superintendent Ariyeh Alkobi, who says that there have been three charges of molestation uncovered thus far. Police say there are other minors who were also molested, but they have not yet filed formal complaints with police.

Alkobi said that the accusations against the rabbi took many by surprise, as he was considered a very popular figure in his community, where he has been living for over 40 years. In his community, he helped found academic institutions and non-profit organizations, and had a reputation of always being available to help advise and counsel people.

The rabbi's defense attorneys claim that people in the community are going "home to home, trying to get people to file complaints against the rabbi." They say the claims are a conspiracy created by a few people who are angry about being fired from their positions in different institutions that the rabbi ran.

The rabbis remand was extended by a week on Friday morning.