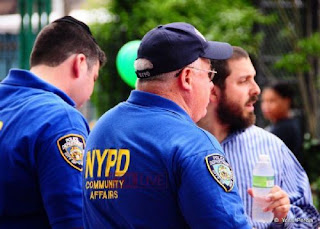 There has been a lot of talk about relationships between Jews and police in Crown Heights. The Rabbis in this neighbourhood even tried to put a lid on some of the more irresponsible comments being made.

I have lived here for over 30 years, and seen some turbulence. There have been murders, the Crown Heights riots and varying levels of general tension. One moment sticks out in my mind. It was one of the many Lag B’Omer parades. in the early 1980′s. There were many more concentration camp survivors around then than today, and a more pervasive awareness among young people of that chapter in Jewish history.

I was watching an NYPD contingent march by in the long procession of participants in the Lag B’Omer parade. I tried to imagine what a holocaust survivor would think if they had seen a far different role for police, one in which being Jewish was a crime, in which failure to wear a yellow star was punished not with a summons but with death. I flashed back to the present, to a time when the police were marching down the street not in an “aktion” to round up Jews but as a gesture of good will to our community. This juxtaposition of images has remained with me ever since that spring day in the early 1980′s. Yes there are “politics” and ticket quotas. There are even “bad apples” who misuse their authority. But there is also redress, something that was unknown to the Jews of Hitler and Stalin’s Europe.

There remain issues that cloud relations between Jews and the police, and between Jews and African Americans in Crown Heights. There are unsolved murders that weigh on the collective memory. Israel Rosen, Bela Meyerfeld and Shlome Fishman are some names that come to mind. These are now cold cases. Could they be adopted by concerned citizens? Could private investigators develop leads? We might do well to compile a list with our black and Hispanic neighbours of a list of unsolved murders. We might want to kick off a movement to remember and lobby for the families of victims of unsolved murders. This might foster an awareness that crime is not an issue that pits races against each other, but an issue that pits decent people against criminals.

I have read comments on Crown Heights blogs that rail against the police for failure to solve crimes. How is it numerically possible for a couple hundred cops in a precinct to be every place where crime is occurring? And if there are more cops, what are they going to do between felony arrests?

Under Rudy Giuliani, arguably the best mayor New York City ever had, we had a “broken windows policy” in which quality of life crimes were hit with summonses. This served two purposes. First, a lot of trivial summonses such as fare jumping and public consumption yielded criminals wanted for other offenses. Secondly, it conveyed a message to the public that the police were watching, that little acts of lawlessness would be noted and punished before they escalated into felonies.

One of the most expensive beers I ever drank was consumed on a Crown Heights side walk on a hot summer day. Even though I drank it out of a paper bag, I was still hit with a summons for public consumption. I told the police who stopped me that I recognised the need to enforce public decorum to create a climate in which public order would be fostered. I sat in court and paid my fine, annoyed not with the system, but with myself.

It would be very appropriate to adopt unsolved crimes and perhaps to even hire private investigators to work on behalf of an advocacy organisation. To send a message to criminals that certain crimes will never be forgotten, that they will always be hunted for their misdeeds is a good message to send.

One last thing that we all should remember. There are close to 40,000 New York City police officers of various ranks. That is equivalent to the population of a medium size town. These are people who are authorised to arrest, detain and use deadly force. They are often traumatised by scenes of violence against themselves and the public. Despite psychological screening, it is reasonable to expect that some members of this town within a city will break the law. That is why this town within a city, the NYPD has its own police force, the Internal affairs division. Even though there are police who break the law, we can and should focus on the vast majority who do their jobs and enforce the law with impartiality.

There is one area where we need to be more active, and that is in making sure that crimes are reported and logged properly. It can be very time consuming sitting in the precinct, telling one’s story three or four times and leaving 4 hours later. Returning the next day and the day after to get a crime report in which the crime is properly classified is a task for which many citizens lack patience. A patrol such as Shomrim or Shmira along with the Crown Heights Jewish Community Council should develop a streamlined system for following up on complaints and getting complaint numbers. Because crimes are solved based on charted trends, and if a crime is not reported, it can not be solved.

Lastly, any fight against crime should be fought by a citizenry not divided by ethnicity. We should view any attack against our black and Hispanic neighbours as an attack against Jews as well, for two reasons. First, someone who hurts a black or a Hispanic will eventually target Jews. Secondly, any crime is a crime against Judaism. Any act of violence or lawlessness within our borders should trouble us, both on a moral and a practical level. Having separate social circles should not preclude united action on matters of common concern.

Together with the police and our neighbours, we are facing tough economic times, in which crime is on the rise. There should be dialogue and cooperation, as well as a state of trust tempered with watchfulness. The police who risk their lives on our behalf deserve this much.
Posted by joe levin at 5:49 PM