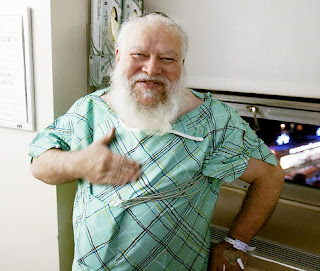 There was at least one shining moment for New York's Strongest during the blizzard: A Brooklyn man says a sanitation worker saved his life.

Pincus (Pinky) Tusk says he would have died after having a heart attack during the colossal storm if Lance Lewin hadn't leaped into action, performing CPR and calling for help.

"I was very lucky this gentleman from the Department of Sanitation came by," Tusk said from his bed at Beth Israel Medical Center.

"Besides thank you, there's very little I can say that would reflect how I feel."

Tusk, 63, of Flatbush, was returning from a wedding in Meadowbrook, N.J., in the midst of Sunday's storm when he got stuck behind a car trapped in a snowdrift on Elizabeth St. in Manhattan.

The furniture salesman, who has a history of heart troubles, helped push the car free - then started having chest pains.

Tusk called his son Moshe, who was in another car, and told him he felt ill. But he gave him the wrong location of where his car was stopped.

Lewin, 33, of Bushwick, Brooklyn, had just finished plowing in front of a police stationhouse when he turned onto Elizabeth St. and found a dozen cars stuck in the snow.

A young man flagged him down.

"He said there was a man who needed help," Lewin recalled. "It was snowing really hard at that point and the car had gotten covered over. You couldn't really see in the windows, but I saw there was a man in there.

"I knocked on the window and he didn't respond. I opened the door and pulled him out, and here he was gasping for air. I asked him if he was having a heart attack and he said he was," Lewin added.

Lewin, an 10-year Sanitation Department vet, radioed his supervisor and told him to get an ambulance. He then dusted off CPR skills he learned years ago at a previous job and began giving Tusk chest compressions.

He took Tusk's cell phone, called the last-dialed number and got his son.

"I told him I was with his father and help was on the way," Lewin said.

With the streets clogged with snow and abandoned vehicles, it took longer than usual for that help to arrive, and paramedics had to walk the last 1-1/2 blocks. Tusk was taken to the hospital, where doctors implanted a stent.

Later, when Lewin went to return Tusk's car keys, he had an emotional meeting with the son. "He came over and just hugged me and said, 'Thank you, thank you, thank you,'" he said. "I told him I was just glad I was there - if it was my father, I'd have wanted somebody to stop and help."

Tusk's son-in-law, Jason Salzberg, said if it weren't for Lewin, "My father-in-law might have died."

"Who knows if they would have found him in time?" he said.

Since then, Lewin has worked around-the-clock shifts, but Tusk said he is eager to meet his savior.