This is the white van involved in the crash. (credit: CBS 2) 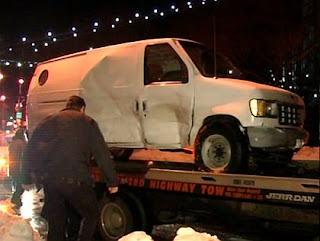 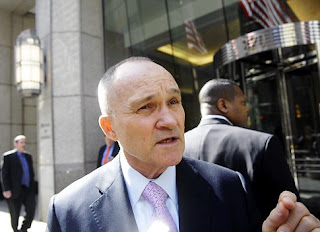 A police car carrying NYPD Commissioner Raymond Kelly was involved in a three-car smashup on the snow-slick Gowanus Expressway on Wednesday, cops said.

The unmarked police vehicle - a 2008 Ford Expedition - was traveling behind a white van as it merged onto the Belt Parkway entrance ramp near 65th St. in Bay Ridge at 8 p.m., police said.

Suddenly, a red sedan cut off the van as the two-lane ramp narrowed to one lane - causing the driver of the Ford Econoline to brake hard and fishtail out of control, police said.

The van slid sideways and got wedged across the roadway between a snow embankment and a jersey barrier - causing the SUV carrying Kelly to T-bone the van at 40 mph, cops said.

A livery car behind Kelly's SUV smashed into the rear end of the vehicle.

No airbags were deployed in any of the vehicles.

Police and firefighters responded to the scene, but everyone involved refused medical attention.

All vehicles were damaged in the crash, but only the van had to be towed away.

The driver of the red sedan continued without stopping.