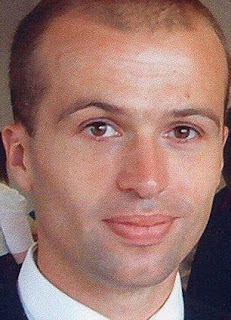 Mystery death spy Gareth Williams, whose body was found in a padlocked bag, visited a series of bondage websites in the months before his death, police revealed today.
The 31-year-old MI6 codebreaker viewed sites showing people bound and tied, which included do-it-yourself guides.

Detectives also found a £15,000 collection of unworn women's designer clothing, including tops, dresses and shoes in his wardrobe.

They revealed he visited a drag cabaret in east London four days before his death and held tickets to two more.

One witness has also come forward to say he was at a popular gay bar in Vauxhall several months before his death.

Mr Williams' decomposing body was found in a holdall in the bath of his Pimlico flat on August 23. The keys were inside.

Detective Chief Inspector Jackie Sebire, who is leading the inquiry, said she is convinced someone else helped put him in there.

She said police believe they will get to the bottom of the intensely private spy's death by studying his private life.

Speaking at New Scotland Yard today, she said: 'We remain completely open-minded about how he died.

'We are appealing today to someone who is out there to come forward and tell us more.'
The GCHQ code-breaker, who had been on secondment to the spy agency, was found dead by police after concerns were raised for his welfare.
The mysterious circumstances of Mr Williams's death sparked an international frenzy of speculation.

No evidence of drugs, alcohol or poisons were found during a battery of tests conducted by toxicologists.

Mrs Sebire revealed that police have forensic evidence that other people were in the flat, whom they have not been able to trace.

She added that an expert, brought in to examine the red North Face holdall Mr Williams was found in, concluded he could not have locked it.

The zip was held shut by a common travel-style Yale padlock through holes in two zip fasteners. Tests found the temperature inside the bag would have risen to 30C within three minutes.

An expert on survivability in confined spaces from the National Policing Improvement Agency (NPIA) said he would have suffocated in 30 minutes. 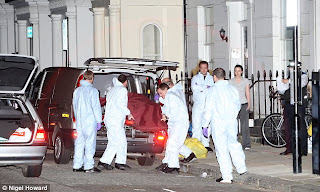 Mrs Sebire said Mr Williams probably died in the early hours of August 16, one week before he was found.

She said there was no sign of injury, apart from bruising to his elbows, which might have taken place some time before his death.

Police also released two e-fits of a couple who said they were visiting Mr Williams's Alderney Street home in late June or July.


The casually-dressed Mediterranean couple, in their twenties, were buzzed through the communal entrance by another resident.

They suggested to the resident that they had been given a key by 'Pierre Palo' and were on their way to flat four.

Mr Williams, of Anglesey, North Wales, was last seen alive on August 15, eight days before he was found dead in the £400,000 property.
Speaking about his private life, Mrs Sebire said a collection of six boxes of unworn designer clothing were found in a wardrobe.
She said items by Stella McCartney, Christopher Kane, and Louboutin had been bought at London boutiques and online.

The senior detective said the clothing was in various sizes, all small, and a number of women's wigs were also found.

She revealed that GCHQ did not know Mr Williams had undertaken the courses or that he had an interest in fashion.

The detectives said it was possible the clothing was linked to the diploma courses for beginners, which Mr Williams had passed.

They were evening or weekend classes which lasted between six and eight weeks.

None of the clothing had been worn or hung up. Buttons were done up and items were still wrapped in paper.

The detective said there was evidence that Mr Williams viewed the sites occasionally from the end of last year onwards.

But she added there was no evidence that he was 'obsessed' with bondage and no other pornography was found.

Mrs Sebire also said no bondage paraphernalia or equipment was found in the flat.

Describing his online bondage habits, she said Mr Williams spent between 30 minutes and an hour on the sites.

Mrs Sebire said: 'It was very limited sections of time. It is not like continual browsing. It was not every evening or weekend. The sites primarily feature women and there are guides on how to do certain things.'
He last visited an online bondage website in July.

Mrs Sebire said that despite the women's clothing, possible visit to the gay bar and drag act tickets, police do not know for certain that Mr Williams was gay.
She said: 'We do not have any evidence to suggest that he was gay. We have not spoken to any past or present sexual partner, whether male or female.

'We know he was intensely private, and however difficult this might be for someone who has has any interaction with Gareth, it would really help us if they came forward so we know if that side of his life had any relevance to his death.'

Speaking about how Mr Williams ended up in the bag, Mrs Sebire said an expert found it is 'quite easy' to fit someone inside.

She said: 'If he was alive, he got into it voluntarily or, if not, he was unconscious and placed in the bag.'

Speaking about the flat, she added: 'There is forensic evidence that indicates the presence of other people that we have not been able to eliminate yet.'

Mrs Sebire said there was no evidence Mr Williams was suicidal and he had recently returned from a fly-drive holiday to America's west coast.

Police said there were no signs of forced entry or a struggle at the top-floor flat, which was rented through a letting agency.

None of his possessions were laid out in a 'ritualistic' manner, contrary to some reports. Mr Williams had a laptop and four mobile phones, including at least one pay-as-you go handset.

Mr Williams returned from the United States on August 11 and attended Bistroteque, in Bethnal Green, on Friday August 13.

Others who were at the event have told police Mr Williams chatted amicably with members of the audience.

Mr Williams also held two tickets for drag shows at the Vauxhall Tavern, a landmark pub in the gay nightlife area, that took place after his death.

A witness has also come forward to say he saw Mr Williams at Barcode, a gay bar in Vauxhall, in May.

He said: 'This is not intended to add salacious detail or tittle-tattle. We feel there is some small sub-group of the community or individuals who may know something about this matter and the nature of Gareth's death.

'They are naturally embarrassing, hurtful and distressing for the family but they are aware of the matters we are raising.'

Mr Campbell added that investigators are sure someone else involved with the bondage or gay scene has 'linked in' with Mr Williams but police 'cannot find that trace'.

He said: 'We are very sure that someone else was in that flat. We want to know the circumstances when you would leave somebody in that position, by accident or design.'

He added: 'Maybe, by explaining to the public, someone will think: 'I get it and I can explain.'

An inquest will be held at Westminster Coroner's Court on February 15.
Posted by joe levin at 3:18 PM