‘It Was Hell’: Dispatchers Tell of Flood of 911 Calls During Storm.... Brooklyn Jew dies after street blocked with snow. 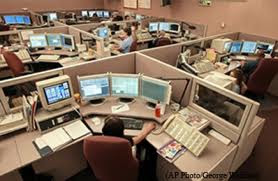 As the snow deepened Sunday and Monday, roughly 100 front-line 911 operators in Downtown Brooklyn fielded tens of thousands of calls, struggling to sort the true emergencies from an ocean of concerns about stranded cars, twisted ankles and people simply stuck in their homes.

The result was frayed nerves and growing exhaustion, as call after call piled up on top of other crises, like ambulances stuck in snow. The dispatchers tried to reroute ambulances and fire trucks and keep in contact with increasingly frantic callers, even as they headed into their third and fourth shifts.

Callers who would normally get an ambulance within minutes had to wait far longer; on Thursday, a neighbor of a 73-year-old man in Brooklyn said that he had died while waiting for one Monday evening.

One dispatcher, who worked for 24 hours straight from Monday into Tuesday, said, “This has never happened before — it was crazy.” The dispatcher, like others interviewed, would not give his name for fear of losing his job. “There were 1,500 calls waiting, and when we sent an ambulance out, it would get stuck in the snow. Except for 9/11, I’ve never seen anything like this.”

The blizzard, and the flood of calls it produced, came at a time when the city is in the middle of a yearslong, $1 billion-plus modernization of its 911 system that officials say will give dispatchers access to the best technology.

But that project has encountered problems and is behind schedule, and for the moment, a spike in calls — like the one during the blizzard — can swamp a system still using outdated radio and dispatch equipment.

On Wednesday, Mayor Michael R. Bloomberg said he was “extremely dissatisfied with the way our emergency response systems performed.” He said that Skip Funk, the city’s new director of emergency communications, would do a top-to-bottom review of what might have gone wrong.

Mr. Funk, whose $200,000-a-year job was created as part of a reorganization meant to breathe new life into the 911 modernization project, has made a career of managing emergency systems. He held a similar post in Chicago.

In recent years, New York dispatchers sent fire trucks racing to the wrong addresses, including one case in which rigs eventually arrived late to the correct location, where three people died. A number of changes have been made since then.

Mr. Funk, commenting on the effort to modernize the emergency dispatch system, said, “I think it is common knowledge the program has had difficulty.” He added that the size of the city’s emergency system — with 12 million 911 calls each year — made it uniquely hard to modernize, in part because most vendors “have never put in systems in a large system like this.”

Mr. Funk said his initial impression was that the dispatchers themselves were not at fault. They “did a tremendous job in sorting out those calls and getting those vehicles on the street,” he said, and also in rerouting responders who had gotten stuck in snow.

He said he would also look at the influx of 911 calls over the last few days, to see if the planned system could handle it — on Monday alone, there were nearly 50,000 calls. “And what we have seen in every crisis over the last number of years,” he said, “is that the spike in the number of calls can be easily handled when we get these new systems in place.

At 11 Metrotech Plaza, the blocklong building at the center of this transformation, dispatchers detailed more basic concerns. When the storm hit, they said, they were inundated by nonemergency calls, mostly from people whose cars were stuck. Some people who could not get through to the overwhelmed 311 system for nonemergency calls — which received 260,000 calls on Monday — called after hearing the recorded advice telling them to “hang up and dial 911” in case of emergencies.

“It was hell,” said one dispatcher finishing his shift. “It was call after call after call. Nobody plowed the streets. How can we protect the city like this?”

With operators unable to get to the communications center because of stopped buses and trains, supervisors instituted a body-to-body rule, meaning that workers could not leave the center unless they were replaced. That meant some operators worked three 16-hour shifts between Sunday and Wednesday, with others working 24 hours straight.

Operators who did not show up to work were classified as AWOL, some operators said, meaning they could face disciplinary action, like docked pay. “People got upset because they couldn’t go home,” one supervisor said. “There was anger in the air.”

Officially, the blizzard caused no deaths, but the long waits for ambulances sometimes had tragic consequences. A mother in Crown Heights, Brooklyn, gave birth while attempting to reach emergency workers, and the baby did not survive.

A 911 call came in around 6 p.m. Monday from 135 Ocean Parkway in Kensington, Brooklyn, where Joel Grossman, 73, was complaining of stomach pain. “He was very much alive, and we knew he needed help,” said a neighbor, Judith Friedman, who was with Mr. Grossman. “It was very difficult for us to explain to him how bad the weather was because he was in such pain, so we didn’t want to make him feel worse.”

About an hour later, dispatchers were told that Mr. Grossman was now unconscious. At 7:47 p.m., the Fire Department said, its ambulance arrived, although Ms. Friedman said the first to arrive was Hatzolah, the private ambulance service.

In any case, it was too late. About five minutes before the ambulance arrived, she said, “He keeled over, fell off of the couch and died.”
Posted by joe levin at 7:53 AM