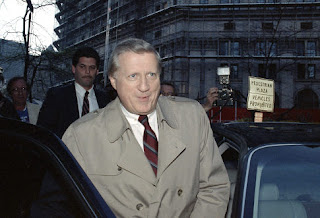 "This investigation is to be afforded highest priority and security," Kelley wrote in one teletype. "Cleveland to assign most capable personnel to achieve prompt positive results."

In a handwritten notation on another memo, Kelley wrote, "hit this real hard with the best talent ... Positive results are expected."

In September 1973, an FBI memo showed Steinbrenner's office told a special agent that the Boss was not available to answer questions on four separate dates.

Agents assigned to chat with Steinbrenner were instructed to read the Boss his rights if he ever agreed to an interview, another memo showed.

Steinbrenner pleaded guilty in 1974 to two charges in connection with illegal corporate campaign donations to both Nixon and Democratic lawmakers. He was fined $15,000.

The documents were part of a 400-page FBI release of files related to the Yankees owner, who died in July.

The Yankees, through a spokeswoman, said they would have no comment on the FBI documents.

The files indicate eight employees at Steinbrenner's American Shipbuilding Co. made donations shortly after the Boss wrote out bonus checks to each.

The employees each told the FBI the same unlikely story: Although the Boss had "encouraged" donations to the Nixon campaign, the money was given without any pressure from above.

Some acknowledged their donations roughly corresponded to the amounts of the bonus checks issued by Steinbrenner.

"I felt so strongly about the necessity of re-electing President Nixon that I would have made some type of monetary contribution even [if] I had not received a bonus," said one employee, covering for the Boss.

A Sept. 7, 1973, teletype from FBI boss Kelley blasted "the fabrication of the deceptive cover story told by the company officials."
Posted by joe levin at 2:22 PM