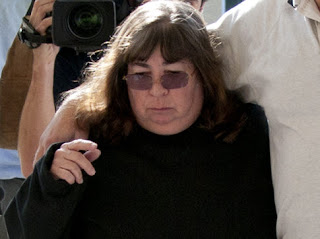 "I'm too upset to talk," Annette Bongiorno told the Daily News before heading off for prison.

The 62-year-old will eventually land in a New York lockup, but not until some time in early 2011.

Bongiorno was initially freed on $5 million bail, but a Manhattan judge said she belonged behind bars pending trial for her role the biggest financial rip-off in U.S. history.

"The evidence against the defendant is extremely strong," said Federal Judge Laura Taylor Swain, adding that Bongiorno faces a stiff penalty if convicted - and has lots of money available to pay for her escape.

Bongiorno collected her things and surrendered to U.S. Marshals Service near her $1.3 million Florida home.

"She's disappointed but stoic," ,defense lawyer Roland Riopelle said. Bongiorno's hopes of traveling to New York by car - she claims a fear of flying - disappeared along with her freedom, the lawyer said.

Bongiorno will spend time in three different federal facilities before arriving back in New York City.

The suspect, a 40-year veteran with Madoff's business, was charged with making millions while helping her boss dupe investors in a massive $60 billion ponzi ripoff.

"There is a serious risk the defendant will not appear," Swain said in ordering her immediately jailed.

Her lawyers had hoped to work out a new bail package after friends and family backed off an initial pledge to put up their property to spring Bongiorno.

Prosecutors charge Bongiorno made $14 million from a $920,000 investment with her now-jailed boss, and played a key role in keeping his scam going for 40 years.

The feds seek a return of the cash from Bongiorno, who is charged with conspiracy, tax evasion and other charges.

She faces more than 75 years in prison if convicted, although her attorney said she has roughly $2.4 million left in cash and assets.

Her old boss, Madoff, is serving a 150-year prison term for duping thousands of investors in the $65 billion scam.
Posted by joe levin at 2:40 PM