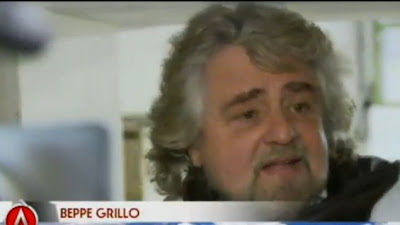 Grillo’s Five Star Movement, or M5S, a protest party without a unified agenda, won about 25 percent of the vote in last month’s general elections. Both Grillo and some of its members have been quoted as making anti-Semitic or anti-Israel statements.

In an interview with the Israeli daily Haaretz published March 22, Pacifici was quoted as saying: “Grillo says that political parties are not important, and that is exactly what Hitler was saying before he came to power. Grillo’s party is more dangerous than the fascists because they have no clear platform – we do not know what their limits are. We don’t know most [of the] people who are in the movement, but we do know that there are extremists from both left and right there − fascists and radicals − and they are together against the constitution, together against democracy.”

He told Haaretz that the rise of radical parties and the growth of Muslim fundamentalism mean that Italian Jews should “start preparing slowly to move to Israel.”

The interview drew an angry response from Grillo, who, on his popular blog, accused Pacifici of “gratuitous and unfounded insults” and offered to meet with him.

Renzo Gattegna, president of Italy’s umbrella Jewish organization, the Union of Italian Jewish Communities (UCEI), also distanced himself and the UCEI from Pacifici’s comments, saying Pacifici was expressing his own opinion and not the positions of Italian Jewish representative bodies. “In particular,” Gattegna said in a statement, “it is necessary to reaffirm that the Italian Jewish community […] has never felt more protected and guaranteed in their rights than it has been since 1948, the year of the promulgation of the constitution, up until today.”

For his part, Pacifici denied that he had called Grillo “more dangerous than the fascists” or his movement “worse than the fascists” and said he has “never believed that.” He said he would be happy to meet with Grillo and discuss “what most alarms us.”
Posted by joe levin at 3:08 PM