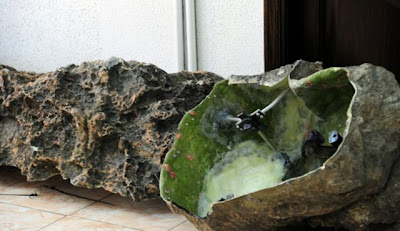 Israel used spying equipment it planted off the Syrian coast to monitor Russian naval movements in the Mediterranean, The Sunday Times reported.


Earlier this month Syria’s state television reported that Israeli spy equipment was uncovered monitoring a “sensitive site” on its Mediterranean coast. The footage showed a camera, six large batteries, cables and transmitters, along with fake rocks used to camouflage the equipment.

The equipment was planted, the report says, on an uninhabited island in the Mediterranean, opposite to the Syrian port city of Tartus, near a Russian naval base. Citing a report on Lebanon’s pro-Syrian Al-Manar television station, the Sunday Times said that the gear could be used to track the movements of Russian warships and relay the pictures in real time.


The Tartus base was leased by the former Soviet Union in 1971.

The equipment, the Times report suggested, was planted on the island by Israel’s elite naval commando unit, Flotilla 13. Transported by a submarine, the concern wasn't that the force would be spotted by Syria, rather that Western forces patrolling and monitoring the coastline would discover the activity.

The report speculates that the commandos had visited the island at least twice, once to obtain terrain samples for the manufacture of the fake rocks and a second time to plant the equipment. Installing the gear, concealing it and making sure it was operational could take several hours, the report said.

It is unknown how long the equipment was operated before it was uncovered.

The spying gear was “highly intricate,” a senior Syrian security official told the Times, who also added that it could have been used to track the Syrian military.


The cameras and the artificial rocks used to disguise it resembled eqipment seized in Lebanon in recent years, which Lebanese authorities said were used by Israel to monitor activity in Lebanon.

The report earlier this month on Syrian television quoted an official accusing Israel of playing a role in the uprising against President Bashar Assad, claiming that the spying equipment was also used in the service of rebels fighting to topple to government.


At the time, Foreign Ministry spokesman Yigal Palmor refused to comment on the report, saying: "We will not be dragged into the Syrian civil war. Not on the verbal or propaganda battlefield, nor on the real one."

Syria is engulfed in a civil war that erupted nearly two years ago, initially with peaceful protests against Assad. The United Nations says more than 70,000 people have been killed in the fighting since then.
Posted by joe levin at 8:15 AM