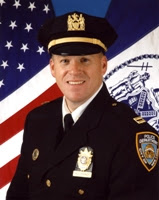 An audio recording made public as part of a federal lawsuit against the New York Police Department's controversial stop-and-frisk policy reveals a commanding officer ordering cops to stop 'male blacks.'


The recording was made in secret in February by Officer Pedro Serrano in the 40th Precinct station house in the South Bronx and played for jurors.

In the tape, McCormack lambasts Serrano for not stopping enough people and insists that he has a duty to prevent violent crime by frisking 'the right people at the right time, the right location.'

After being pressed as to who the 'right people' were, McCormack explained that they were the ones causing the most problems, Gothamist reports.

Finally, he specifies exactly who he means.

'The problem was, what, male blacks. And I told you at roll call, and I have no problem telling you this, male blacks 14 to 20, 21,' McCormack can be heard to say on the tape.

Attorneys for the Center for Constitutional Law arguing on behalf of four people who claim they were stopped and checked only because of their race claim 'the right people' is routinely used among NYPD commanders as code for blacks and Hispanics.

Since Bloomberg took office the number of people subjected to stop-and-frisks has increased more than five times over.

Serrano, himself Hispanic, testified that being forced to stop-and-frisk minorities was 'not a good feeling.'

'They're asking me to do something that's illegal, I believe, and I was worried,' he said, explaining why he made the recording.

Once while issuing what he said was an unjustified summons to some teens, he told them 'they should take my name down and if they sue, they could use me as a witness.'

McCormack will testify next week.

The Times reported that in a later part of the audio not played for the jury McCormack accused Serrano of attempting to put words in his mouth.
Posted by joe levin at 1:48 PM