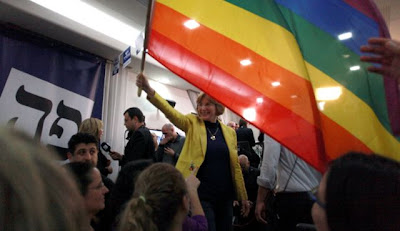 
The form filled out by every blood donor in Israel states that gay men who have had sex with other men are prohibited from donating blood.

People who have tested positive for HIV, used drugs or been exposed to mad-cow disease, among other constraints, are also prohibited from donating blood.

After the Passover holiday, a Health Ministry advisory committee on intravenous medicine headed by Professor Noga Mani, formerly the head of the Hadassah blood bank, will convene to discuss the issue revisited by German, formerly the mayor of Herzliya.

"The committee will call on relevant professionals as well as the leaders of the gay-lesbian community, hear their opinions and examine the possibility of changing the clause," the ministry stated yesterday.

Magen David Adom, the emergency-services organization responsible for Israel's blood banks, began to monitor and limit gay donors in the 1980s following the discovery and spread of AIDS. In the questionnaire given to donors, any man who has had sex with another man since 1977, the year HIV was first discovered in humans, is disqualified.

Many other countries also limit blood donations from gay man. The U.S. Red Cross disqualifies would-be donors who had sex with another man even before 1977, while New Zealand does not accept blood from men who have had sex with other men during the previous five years.

In many countries, including the UK, Sweden, Japan, Australia, Brazil, Argentina and Chile, a one-year time frame is enforced. In South Africa the time limit is six months, while several countries including Italy, Spain and Mexico have no limitation whatsoever.

Israel's LGBT community raised the issue back in 2004. The last debate on it was held a year ago, at the behest of Labor leader Shelly Yacimovich and gay activists in the Labor party, but the staff at the Health Ministry opted to leave the clause unchanged.

Health Ministry and MDA officials continue to define gays as a high-risk group for HIV infection, especially since the rise in recent years in HIV infection in the local gay community.

The Labor party's gay organization welcomed the move, calling it a positive step, while noting that a number of Health Ministry committees had already examined the subject in the past, and that they had all eventually decided to leave the clause untouched.

"We hope that this time the committee will decide to set a time limit for [the clause], if not to cancel it altogether, similar to the trend in enlightened states," the group said.
Posted by joe levin at 4:35 PM