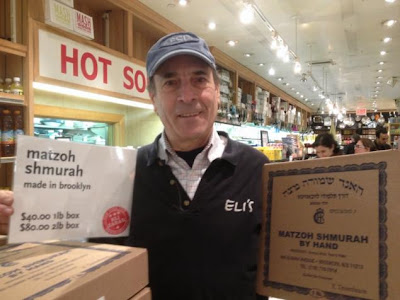 
Ritzy Upper East Side markets are selling boxes of the Passover staple for twice the Brooklyn price, the Daily News has found.

While D & T Shmura Bakery on Albany Ave. charges $21 for a pound of their unleavened bread, posh shops such as Dean & Deluca, Eli’s, and Butterfield Market hawk the same-sized holiday necessity for as much as $40.

“They sell it to us at a mark-up and we have to sell it at a mark-up,” said Ross Breen, the general manager of Eli’s on 3rd Ave which has D & T’s shmura matzoh for $40 a box. “We order 500 pounds every year and we always sell out.”

Jews across the world will spend eight days noshing on the cracker-like food during Passover starting Monday. Religious law forbids eating bread during the holy week honoring the Hebrews escape from Ancient Egypt.

Most city supermarkets carry factory-made matzoh for under $5 a box.


But in Brooklyn’s Hasidic enclaves, shmura matzoh, often made by hand during an 18-minute process monitored by rabbis, is the big seller at $20 a box.

The artisanal matzoh has become increasingly popular - but finding it outside of Brooklyn is a tough feat.

“People are willing to pay a lot for tradition,” said Benny Rogosnitzky, the cantor at the swanky Park East Synagogue on E. 67th St. “There is no one in Manhattan making these types of matzohs.”


Eli’s workers stuck a “made in Brooklyn” sign on top of stacks of the Crown Heights matzoh showing off its roots as a selling point.

“It used to be something for only ultra-Orthodox Jews,” said a baker at D & T. “More people are interested in this now. Matzoh is the center piece of the seder. It is the icon.”

Upper East Side shops said they carry D & T versus other Brooklyn bakery brands due to its rare recipe blending white and whole wheat flour.

“Most matzohs aren’t handmade. They are machine made,” said Alan Obsatz, 67, who grew up in Crown Heights and has carried D & T in his posh Butterfield Market, on Lexington Ave., for more than 20 years.

Obsatz sells his boxes for $30 a piece.

“It’s the cost of doing business,” Obsatz said about the price increase. “We have to pay the rent.”


Crown Heights residents weren’t impressed with the explanations why the matzoh was going for twice the price just a 45-minute ride away on the 4-train.

“It’s ridiculous,” said Simcha Minsk, 10, giving away free handmade matzohs on the corner of E. 78th St. and Lexington Ave. with a group of other kids promoting Passover to passersby.