Chief Rabbi Metzger: Another term? Not relevant… yet 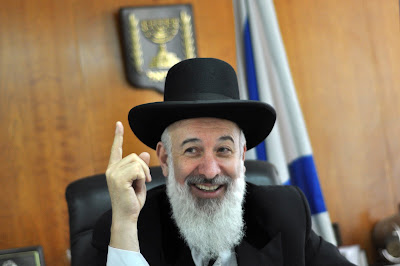 Israel's Chief Rabbi, Yona Metzger, is reaching the end of his term in office in the upcoming months, and according to him the possibility of going for a second term is out of the question, or is it?


As the government is poised to vote in favor of what some are calling the Amar Law, which allows head rabbis to contend for a second term, the chief Ashkenazi rabbi promise he will sit out the race for the rabbinate. However, Thursday he did seem to hint at the possibility he would in fact consider a second term.

When asked at the end of the traditional Birkat Kohanim (Priestly Blessing) held Thursday at the Kotel, if this would be his last, Metzger answered: "Are you deciding for me? I don't know myself."

When explicitly asked whether he would vie for a second term, he said: 'For the meantime it's not relevant."

The Chief Rabbi Shlomo Amar, who also partook in the blessing for the last time of his current term, answered the same inquiry saying: "We hope Am Israel will feel well and be joyous – I will be chief rabbi and after me there will be another chief rabbi. This is idle chatter, they make no difference."

The ratification of the Amar Law, promised to the Habayit Hayehudi in their coalition agreement, was formulated to allow Amar to serve a second term, and thus allowing Shas to support Naftali Bennett's candidate for the Ashkenazi chief rabbi.

However, if Metzger decides to run for a second term it might shift the balance of power in the rabbinate's voting body, marring the chances of an election of a Zionist rabbi, as Bennett had originally wanted.

The working hypothesis is that because Rabbi Metzger is less popular than his Sephardic counterpart, he will not take advantage of the Amar Law and run a second time, fearing an embarrassing public loss.

However, if he does in fact run, then publically, Rabbi Amar will have a harder time making good on his end of the bargain with Bennett and support an external candidate, opting instead to support Metzger, and thus increasing Metzger's odds if he indeed chooses to run.

This is also an additional reason why non-Metzger supporters within the voting body are likely to support him if he should run; fearing that an abstention would be perceived not as a flat out loss but rather a rejection of an already serving chief rabbi.

Some 10 days ago, the government agreed to prolong the two chief rabbis' terms until an election is held. The two were originally scheduled to conclude their terms last week.
Posted by joe levin at 9:21 AM