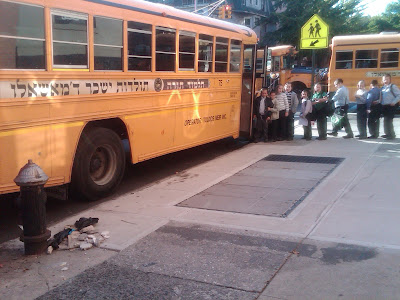 ALBANY — Language tucked into the tentative state budget could mean a more convenient bus ride home for yeshiva students, but leave taxpayers with a hefty bill.


State legislators have proposed expanding bus service to private school students who attend late afternoon classes. Nearly all of these students are in yeshivas.

Current regulations require busing students who attend classes until 5 p.m. to a stop within a quarter-mile of their homes.

But the new language will require the buses to drop these students off no more than 600 feet from their homes. And students would only have to attend classes until 4 p.m. to be eligible.

The move spurred outrage from the Bloomberg administration Monday.


“At a time when the city is being forced to do more with less, it is outrageous that the state would create a new unfunded mandate that will benefit a politically powerful special interest group,” said Bloomberg spokesman Mark Botnick.

City officials have argued the new requirements will require twice as many stops as before and likely prompt parents of students at charter schools and other private schools to clamor for equal treatment.

Critics are calling the new requirements a political giveaway to the Orthodox Jewish community. It was pushed by Senate Republicans and their renegade Democratic ally state Sen. Simcha Felder of Brooklyn.

When the Daily News first disclosed the proposal two weeks ago, Mayor Bloomberg objected and Gov. Cuomo provided assurances that it would not be included in the state’s final spending plan.

“Given the cuts already facing the city, we will have no choice but to cut other services to pay for these costs,” Botnick added.


Cuomo administration officials did not respond to requests for comment on why the governor decided to go along with the busing provision.

State Sen. Martin Golden (R-Brooklyn) defended the measure, saying it’s intended to ensure safe transportation for all students — not just those in yeshivas. He accused the city of exaggerating the fiscal impact.


“I think it is a safety issue,” Golden said. “I think it should have been done all along.”

The state, under the measure, will provide up to $5.6 million for the service but the bill also requires the city to spend an equal amount. City officials have warned the price tag could eventually run into the hundreds of millions of dollars.

The state and city have historically split the cost of busing kids to private schools during the regular school day.

But last year, over the objections of Bloomberg, the Senate GOP successfully pushed to require city bus service for students at private schools that offer classes until at least 5 p.m.

Thirty schools took advantage — 29 yeshivas and one charter school — for a total cost increase that was capped at $3 million.