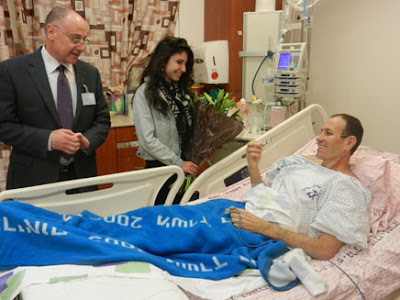 Acre Mayor Shimon Lankri on Sunday relived the assassination attempt he survived ten days ago, telling reporters for the first time about the ordeal doctors described as a lucky escape.


Late Thursday, a masked gunman shot Lankri in the chest from close range when the mayor stopped his car at a traffic light near the Kafr Yasif junction, in the vicinity of his northern Israeli hometown. He managed to call rescue services and was whisked by ambulance to a hospital in Nahariya, in serious but stable condition.

“I saw it with my own eyes. The muzzle of the gun was pointed at my head,” Lankri said, eyes downcast.

“Twenty meters before the junction, I noticed two people standing by the side of the road. They were masked, their faces partially covered by robber hats,” he said. “As soon as [one of the men] made a move to pull out the gun, I was already out of their, driving, speeding away.”

Though Lankri’s attempt to escape was successful, the shooters managed to wound him in the chest, breaking his ribs and puncturing his lungs. Lankri drove on, though he had difficulty breathing and was bleeding profusely. The first people he contacted were his friends in Kafr Yasif whom he had visited before the incident, because he knew there was an ambulance station underneath their house.

Asked who he thought was responsible for the attempt on his life, Lankri told Channel 2 that he believed “criminal elements” were behind it.


“There are criminal elements who are interested in controlling resources,” he said. “I believe we have caused them much damage by running [the city] in such a meticulous, orderly, lawful and organized way.”

Internal Security Minister Yitzhak Aharonovitch was among the visitors at the Nahariya Hospital for the Western Galilee’s intensive care unit, where Lankri was hospitalized. “This is a very serious incident,” Aharonovitch said. “We realize its gravity and intend to apprehend those responsible,” continued the minister.

“Mayors are more vulnerable to criminal assaults and should be given proper protection so they can perform their duties,” Aharonovitch added, noting that there are also dozens of police officers operating under constant threat.

In August of 2012, police recommended that a guard detail be assigned to Lankri due to threats over his decision to close a horse farm.

More recently, a man was arrested after intelligence garnered by police indicated that he intended to attack Lankri with a grenade. The man was questioned and later released, and there was no indication of a connection with Thursday’s shooting.

Lankri, a former career officer in the IDF, was first elected mayor of Acre in 2003. On Sunday, he said he would like to run for mayor for the third time, indicating that the attempt on his life hadn’t broken his political resolve.
Posted by joe levin at 4:37 PM