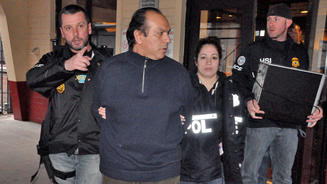 A Manhattan doctor and his office manager are among 49 people arrested in New York, New Jersey and Pennsylvania in connection with a 15-month investigation into two prescription drug distribution networks operating throughout the northeast. Thirty weapons were also seized.


Dr. Hector Castro, founder of the Itzamna Medical Center on East 16th Street in Manhattan, his office manager, Patricia Valera, and her husband, and three others are charged with conducting two separate schemes that together put more than 500,000 narcotic pills worth at least $10 million onto the black market, law enforcement officials said.

The suspects were arrested Tuesday by agents from the U.S. Drug Enforcement Administration and U.S. Immigration and Customs Enforcement, along with NYPD officers.

Authorities say the investigation of Castro’s alleged prescription sales began in 2011 after a pill bottle bearing his name was found at the scene of a fatal Oxycodone overdose in New Jersey.

An undercover officer infiltrated a New Jersey drug trafficking organization and began making regular visits to Castro’s office. Over time, he purchased 28 prescriptions for Oxycodone at $125 each, according to court documents. Castro never performed any physical examinations on the undercover officer, sources said.


Investigators say Valera allegedly stole blank prescription sheets from both Castro and his brother - also a physician but not charged in the investigation - forged the prescriptions and sold them to two drug trafficking organizations in Pennsylvania for approximately $500 each.

Pennsylvania authorities charged the leaders of two major drug trafficking networks and 41 others with filling prescriptions for Oxycodone illegally supplied by Valera and distributing the pills in Pennsylvania, law enforcement officials said.

Both Castro and Valera pleaded not guilty in Manhattan Supreme Court Tuesday.

Information on attorneys for the suspects wasn't immediately available.