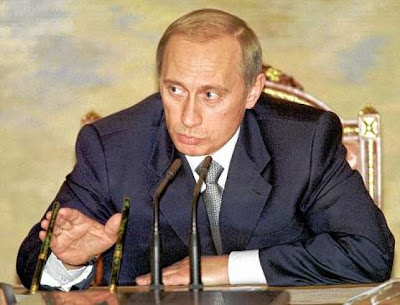 The Channel One said the suspects, linked to a Chechen rebel leader, were preparing to kill Putin in Moscow immediately after next Sunday's presidential vote, in which he is all but certain to reclaim the presidency.

The station said the suspects had been arrested in Ukraine's Black Sea port city of Odessa following an accidental explosion that occurred on Jan. 4 while they were trying to manufacture explosives at a rented apartment.

Putin's spokesman Dmitry Peskov confirmed the report to the ITAR-Tass news agency, but refused to make any further comment.

The station said the source for its information was Russia's Federal Security Service, the main KGB successor agency dealing with domestic security. It was impossible to independently verify the claim made in the program.

Russian and Ukrainian special services wouldn't comment on the report.

The Ukrainian Security Service had said it detained three Russian citizens on terrorist charges in Odessa on Feb. 4, but it didn't say then whether the suspects were linked to an anti-Putin plot.

The Channel One said two of the alleged members of the group arrived in Ukraine from the United Arab Emirates via Turkey with instructions from Chechen rebel leader Doku Umarov. One of them, a Chechen, was killed during the accidental explosion in Odessa and another one, Kazakhstan's citizen Ilya Pyanzin, was wounded in the blast and arrested.

Pyanzin led the investigators to their liaison in Odessa, Adam Osmayev, a Chechen who previously had lived in London, the report said.

Speaking to Channel One from custody in Ukraine, Osmayev, whose face was covered in cuts and bruises, said that the group's mission was to kill Putin using a powerful explosive device.

"Our goal was to go to Moscow and try to kill Prime Minister Putin," Osmayev said. "Our deadline was after the Russian presidential election."

The Channel One said Osmayev had led the investigators to a cache of explosives near a Moscow avenue that Putin uses to travel between his office and a suburban residence. A Russian security officer told the station that the suspects also had videos of Putin's convoy taken from different angles to prepare the attack.

Pyanzin also was shown saying that they were to sabotage economic facilities and then try to kill Putin.

Opinion polls show that Putin is all but certain to win a first-round victory in the presidential vote despite a series of massive protests in Moscow against his rule that have dented his popularity. He managed to recoup some of the losses thanks to massive daily coverage by state-controlled TV stations that cast him as a defender of the nation's welfare against foreign plots.
Posted by joe levin at 4:47 AM