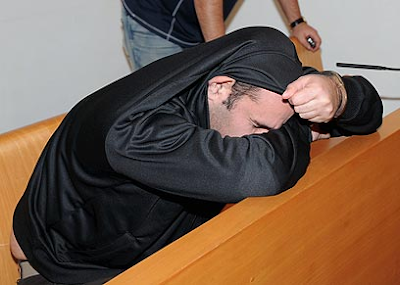 Court agrees to lift gag order over man arrested on suspicion of molesting under 14s.

The Haifa Magistrate's Court agreed on Sunday to lift a sweeping gag order preventing the publication of details relating to the arrest and remand of a Yehud- Neve Efraim man on suspicion of a series of sex offenses against minors.

Avraham Horowitz, aged 33, was arrested two weeks ago on suspicion of persuading women to perform indecent acts with children under 14, while he watched them over the internet. On Sunday, police requested that Horowitz's remand be extended for the fourth time, on this occasion for a further eight days, while they continue to investigate the suspicions and gather evidence.

The police also requested that the court rescind the gag order so that other alleged victims could come forward.

A police representative told the court that the investigation into the suspected offenses was still ongoing, and that police had gathered evidence including material from Horowitz's computers. Prior to Horowitz's arrest, an undercover investigation had taken place during which the police had also applied to the court and obtained a warrant to wiretap the suspect's telephones, the court learned.

The suspect's attorney, public defender Boris Sherman, opposed the removal of the gag order before any indictment was filed, arguing that releasing their client's name could damage his reputation and noting that Horowitz has no criminal record.

Sherman asked to appeal against the court's decision to remove the gag, but the court disallowed that request.

In ruling to remove the gag order, Judge Zaid Falah said that the court had initially imposed it for two reasons: to protect minors and to allow the investigation to proceed.

However, the judge said that at this stage, the public ought to be warned about the matter.

Another consideration that justifies removing the gag order is to enable women and others who for reasons of their own have not complained, to know about the details of this case and the details of the suspect who may have also committed sexual offenses against others, so that they can come forward and complain to the police," Judge Falah said.

However, as is standard with suspected sex crimes, the court ruled that no details of any of the complainants in the case can be published.

Judge Falah also ruled to extend the suspect's remand in order that the police can complete their investigation, but only for four days and not the eight police had requested.

There are reasonable grounds for concern that the suspect's release could endanger public safety and obstruct the investigation by influencing witnesses and their versions," he said.
Posted by joe levin at 4:05 PM

Email ThisBlogThis!Share to TwitterShare to FacebookShare to Pinterest
Labels: jpost.com