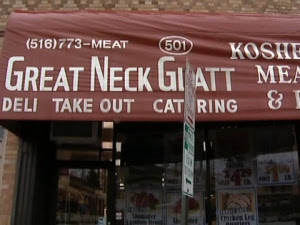 NEW YORK — The search for radical terrorists took the NYPD to kosher butchers and candy stores on Long Island.

Friday night, CBS 2 learned Jewish-owned businesses were put under surveillance, along with mosques and businesses that cater to Muslims.

The NYPD is under fire from critics for putting mosques and Muslim facilities under surveillance. On Thursday, Rep. Peter King offered this response: “If you’re going after radical Muslims, you don’t go to Ben’s Kosher Deli.”

But what about Great Neck Glat, a kosher meat shop, which proudly flies the flag of Israel inside?

Secret documents obtained by the Associated Press show Great Neck Glat is one of almost a dozen Jewish-owned businesses the NYPD surveyed in Nassau County.

The anti-terror effort was focused there because many in the Great Neck Jewish community trace their roots back to Iran, CBS 2′s Tony Aiello reported.

Locals say they support the NYPD in general, but don’t know what to make of the surveillance.

I hope they are not wasting their time,” said one local resident.

Congressman King, however, said to trust the NYPD.

Something that may on the surface not necessarily be connected can make sense to them,” King said.

New York City Mayor Michael Bloomberg defended the program earlier Friday, saying it was not “a political statement or a political football to play with.”

The NYPD is just putting people under surveillance by virtue of ethnicity, by virtue of national origin, by virtue of religion, but not by virtue of suspicious behavior or evidence of wrongdoing,” said Donna Lieberman of the NYCLU.

Email ThisBlogThis!Share to TwitterShare to FacebookShare to Pinterest
Labels: WCBSTV