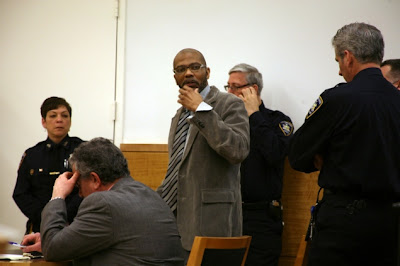 A slimy, sanctimonious sicko who twice raped a young girl in a filthy Brooklyn elevator room had the gall to dole out advice to his victim at his sentencing Wednesday.

Adam Wright, 44, was hit with 47 years in prison, but when given a chance to address the court, the creep looked at his victim and tried to counsel her.

Wright committed the heinous crime in 2002, but was only caught in 2008 after a DNA hit following an arrest for carrying an open alcohol container.

"This defendant raped a 12-year-old stranger then completely dressed her, leading her to believe, however fleetingly, that her nightmare is over. He then undressed her and raped her a second time," Brooklyn Supreme Court Justice Dineen Riviezzo said before the sentencing.

Citing "the particular heartlessness of his act," she imposed the stiff sentence, rejecting Wright’s claim that the 2002 assaults should be considered one crime and not two.

Wright acted as his own lawyer during the trial, cross-examining his victim and arguing DNA samples were somehow "co-mingled" in an intra-agency conspiracy to frame him.

"His defense," the judge found, "had certainly no basis in the evidence and no support in the facts whatsoever."

The brave victim, now 21, twice ran off the stand in tears during her trial testimony, struggling to describe each sex assault.

"It was the day my childhood was taken by a man I never saw [before\] or even knew," she said Wednesday. "I had nightmares day in and day out, year after year."

The nursing student, who was violated in a dirty chamber on the rooftop of her Canarsie tenement, described being afraid of men and changing from a sweet young girl into an aggressive and reclusive teen.

The young woman betrayed no emotion as he spoke and minutes later the judge granted her wish, effectively locking up the pervert for the rest of his life.

"Today, it brings me great comfort," the victim told Wright, "that you are going away and will never do this to anyone ever again."
Posted by joe levin at 6:58 PM