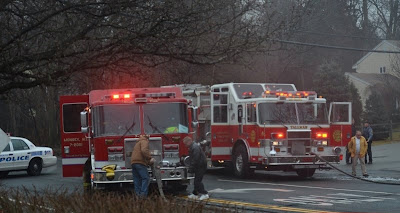 "Monsey lightning" has struck again. This time at 178 Maple Avenue, on the morning of February 10, where a vacant house that was slated for demolition caught fire.

After 13 years of service, I recently resigned from the Brewer Fire Engine Company #1, which services the Monsey Fire District. The phenomenon of "Monsey lightning" is something every Monsey firefighter has experience with. It happens when a building is scheduled for demolition, and mysteriously catches on fire. As if it had been struck by lightning.

"Monsey lightning” happens for a reason. It tends to be financially advantageous for the property owner. Burning down a structure lowers the cost of demolition by shortening the time of the job, and lessening the amount of debris that needs to be carted off.

The problem with "Monsey lightning” is that it endangers the lives of firefighters. This point was brought home to me very early one Sunday morning, several years ago, when I was conducting a search in a home that had been struck by "Monsey lightning."

The house was a standard, split-level ranch that had been converted into a dormitory (legal or not, I have no idea). When we arrived at around 4:00 a.m., the house was completely engulfed in flames. After knocking down the bulk of the fire, the chief sent myself and a handful of other firefighters into the building to check for survivors/victims.

It was clear to all of us in the search team what was going on. Here was a building that housed 20-30 men, none of whom happened to be home that night. Each room had a handful of single beds. Each bed had a small closet/locker area next to it.

While the beds were still covered with sheets and blankets, all the closets had been cleared out. There were no clothes to be found. And, thankfully, no bodies, either. Our search team was making sure of that, when we got the order to evacuate the building. Apparently, the walls of the building were starting to bow out, indicating the possibility of structural collapse. We promptly left the building.

Everything worked out fine that night (as it did the other day on Maple Avenue). There were no stray occupants in the building, and all the firefighters made it home. But later, reflecting upon the incident, I got pretty upset. The Arson Unit of the Bureau of Criminal Investigations (a division of the Sheriff’s Department) determined there had been six points of origin of that fire.

Think about that. The fire had started in six different places. In an abandoned building. In the middle of the night. "Monsey lightning.”

It made me furious to think that I, along with every other firefighter in that building, had been risking my life simply because some lowlife wanted to save a few bucks on demolition costs. As a firefighter, I was always willing to risk my life to save another, but this was not what I signed on for.

We joke about it, but "Monsey lightning" is not funny. And one of these days, someone is going to get killed because of it.

I call on the Sheriff's Department, under the new leadership of Lou Falco, to be more aggressive in pursuing the self-centered sociopaths who cause "lightning” to strike in Monsey or anywhere else in the county.

I would also like to suggest a solution. To anyone who owns a building that is about to be demolished, consider allowing your local fire company to burn it down for you. Live burn drills allow firefighters the rare opportunity to train safely in real world conditions.

It’s not always possible to conduct a live burn on a structure, but when it is, the experience provides invaluable training for firefighters. And you could realize a savings in both a tax donation, and reduced demolition costs. The first step is to contact your local fire department.

By recognizing this "lightning” for what it truly is, a class A felony with potentially fatal results, perhaps we can cease it from striking in the future.