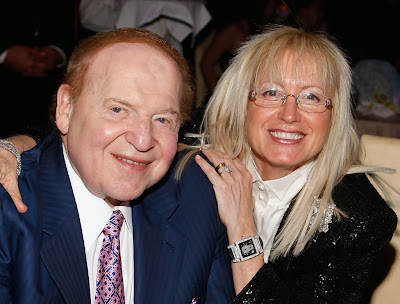 Billionaire businessman Sheldon Adelson, who owns the Israel Hayom newspaper and is considered a supporter of Prime Minister Binyamin Netanyahu, revealed in an interview at Yeshiva University Tuesday that he would handle negotiations with Iran by first dropping a nuclear bomb in a desert location – presumably in Iran, though he did not say so outright -- then threatening to do the same "in the middle of Tehran."

The interview was recorded and transcribed by blogger Philip Weiss in Mondoweiss.
Adelson was asked by interviewer Rabbi Shmuley Boteach if he would support negotiations with Iran if Iran first ceases all enrichment of uranium.

"No," said Adelson. "What do you mean support negotiations? What are we going to negotiate about? What I would say is, ‘Listen, you see that desert out there, I want to show you something.’ You pick up your cell phone, even at…roaming charges.

You pick up your cell phone and you call somewhere in Nebraska and you say, ‘OK let it go.’ So there’s an atomic weapon, goes over ballistic missiles, the middle of the desert, that doesn’t hurt a soul. Maybe a couple of rattlesnakes, and scorpions, or whatever.

"And then you say, ‘See! The next one is in the middle of Tehran. So, we mean business. You want to be wiped out? Go ahead and take a tough position and continue with your nuclear development. You want to be peaceful? Just reverse it all, and we will guarantee you that you can have a nuclear power plant for electricity purposes, energy purposes.’"

"The only thing they understand," answered Adelson.

Asked if he sees the current negotiations as a demonstration of weakness, Adelson replied – "Absolutely."

Earlier, Adelson called the United States President's approach to talk with Iran "the worst negotiating tactic I could ever imagine, my entire life."

"Because you can’t get anything," he explained. "He’s not saying to them, Roll back your entire program and show that you’re willing to be peaceful. So, roll it all back… and we’ll roll back the sanctions…. What is that, a game of chicken, who’s going to blink first?"

Adelson also had advice regarding a tough approach to the Palestinians.

"If they truly want peace, it’s very simple to say to all their henchmen, lay off the terrorism for five years.

And they’ll come to the Jews and say, for five or ten years there will be no terrorism, there will be no violence or no incitement against – We’ll throw out the books that teach the three-year-old children that Jews are descended from swine and apes, and that we’re not going to teach anymore in the curriculum to kill the Jews, that the Jews are very bad people.

"So if you really want peace, it’s very simple to send a message to your opposition. Just be peaceful. Open up all the things."

The current approach, which he summed up as "We'll give you this if you give us something," is "the worst negotiating ploy, tactic anybody can imagine," he said.