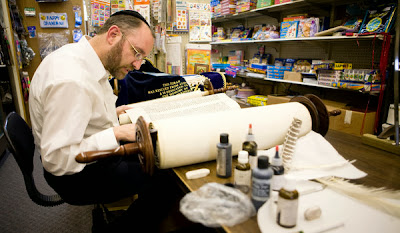 NEW YORK -  In the jewish religion, the torah is a sacred document. But one rabbi played on the emotions of religious jews to steal more than a million dollars and shake their faith in those they believed they could trust.

In a video, Rabbi Manachem Youlus said, "How many scrolls could have survived the holocaust...5... 10... Now I know it is thousands..." He called himself the 'Jewish Indiana Jones' and told dramatic tales of rescuing holocaust-era torahs.

A victim, who wanted to remain anonymous, said, "The torah is something you can't even describe how importance it is, it is the essence of our existence really so for someone to do such a horrible thing and cause so many people such despair and it's unthinkable, especially in the name of religion."

His stories were all fiction. One woman is still embarrassed by the fact that the "restored" torah scroll her family thought they were buying for their father was a total fake. "First, it was disbelief and shock. So to think this rabbi would do such a thing is unthinkable. Unthinkable. To tell my father would absolutely crush him."

Donna Harris, is with the U.S. Postal Inspection Service. She said, "Postal inspectors found out through research and historical facts, where rabbi said he found these torahs it couldn't have been based on his travels."

Youlus sold the so-called historical torahs for thousands of dollars to people who believed they were buying history.

Harris said, "Rabbi Youllas had torahs, but they weren't rescued from the holocaust, from concentration camps they were torahs he purchased from torah dealers here in the U.S."

In all, the scheme cost consumers: $1.5 million. Youlus spent some of the money in personal accounts and on private school tuition for his children. But more importantly he stole the trust of his victims.

The anonymous victim said, "It was truly a roller coaster of emotion, from the time we first came across this organization, to the time we gave him the gift it was such a high, to when we found out this was a fraud, which was the depths of despair and then had to go tell him... it really put a cloud over his 75th birthday."

Rabbi Youlus was ultimately found guilty and sentenced to 4 years in prison. At his sentencing Youlus apologized and said he regretted his conduct.