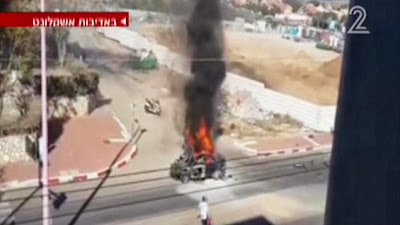 A powerful car bomb shook buildings in the coastal city of Ashkelon on Thursday afternoon, in what police suspect was a criminal-related assassination attempt. Two men were seriously injured in the blast, and one later died of his wounds while hospitalized.

The explosion struck a private vehicle while it was in motion at around 3 p.m., near the intersections of Zionism and Montifiore streets in central Ashkelon, close to a school. The two victims, both in their 40s and known by police to belong to a criminal organization, were severely burned and suffered internal injuries. They were evacuated to Barzilai Hospital, where one succumbed to his injuries while the other remained in critical condition.


The blast rattled the surrounding neighborhood. One witness told Ynet news he initially thought it was a suicide bombing or rocket attack and that “the buildings were shaking.”

Police said that the investigation was ongoing, and that they believed the explosion was related to rival groups involved in criminal activity in the city. The two victims, police said, were senior members of the Domrani crime family, and authorities feared that a spate of revenge killings in response to the bombing would occur.