Monsey - Fire breaks out at house tied to disputed yeshiva 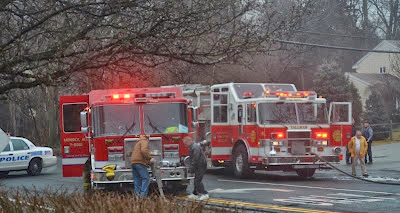 Monsey -  A 13-year-old girl suffered smoke inhalation Wednesday after a fire broke out at a building next door to a yeshiva that had been illegally converted from a single-family house on Highview Road.

The girl, who was treated at Good Samaritan Hospital, had been home alone in the caretaker’s house with two small dogs when an iron left unattended in a second-floor bedroom ignited the fire at 95 Highview Road, authorities said.

The house apparently lacked smoke detectors as flames left the house uninhabitable for the family of five, officials said. Tallman Fire Chief Chris Szklany said 40 firefighters responded and made short work of the fire and smoke flowing from the two-story building.

Neighbor Annette Doerr called the fire a “nightmare,” especially after she said close to 150 students at the yeshiva next door at 97 Highview Road moved close to the burning house to watch firefighters. She has surveillance cameras and said she counted the students.

“The kids all came out and went onto the lawn to look at the fire,” she said. “I’m screaming like a lunatic at them to get away. I brought them onto my lawn.”

Doerr also said she was concerned the flames shooting out of the second-floor window might spread to a town-approved trailer used as a classroom about 50 feet away.

Doerr and her husband, Bob, have been fighting Ramapo and Talmud Torah Ohr Yochanan since the congregation illegally opened a school inside the single-family house at 97 Highview Road in October 2009.

Ramapo took Talmud Torah Ohr Yochanan to state Supreme Court to force installation of fire-safety devices and to ensure the congregation obtain site-plan approvals and get variances. The agencies are still reviewing the plans.

Since then, the number of students and teachers has been capped at 85 for the house, but the school has added two trailers and set up classrooms on the second floor to accommodate up to 165 students.

Officials with the Rockland County Illegal Housing Task Force, which reported the yeshiva to the New York State Codes Division some time ago, blasted the owners of the property Wednesday.

“It was an illegal school in a former one-family home which has been cited by the town, but continues to operate as it seeks tax-exempt status,” said John Kryger, task force chairman. “If this fire had occurred at 3 a.m. instead of 3 p.m., the fire departments would be pulling bodies from that rental unit, never mind the school.”

“If the town is going to continue with its policy of granting permissions after the fact and ignoring violations, it’s time for a higher authority to step in,” he said.

Building Inspector Anthony Mallia said he’s waiting for his fire inspector, Thomas Buckley, to give him a final head count of students at the school. The school could face additional violations.

Buckley said the fire was not suspicious and the house was uninhabitable. The family’s two dogs were rescued by Doerr.

A man who identified himself only as Rabbi Meisel said the children were kept safely away from the flames by administrators and then bused home.