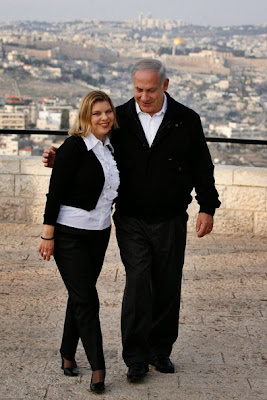 The daily newspaper Yisrael Hayom publishes some "scoop" on the Netanyahu family every few days.

One was about the prime minister’s birthday party, another about his wife’s visit to the United States Military Academy at West Point, New York, and yet another was about the memorial service held on the second anniversary of the death of Sara Netanyahu’s father, Shmuel Ben-Artzi. The source of all these stories, which bear no connection to real news, is the Prime Minister’s Office, for which Yisrael Hayom serves as a mouthpiece.

According to the report, the New York Times apologized to the prime minister's wife for part of a story it had published a few days earlier.

In the story, which discussed the isolation the prime minister finds himself in with regards to the Iranian issue, there was also mention of harsh criticism voiced by the Israeli public at the way Sara Netanyahu educates her children. Last Wednesday, in a small column devoted to corrections, the following clarification was made:

“Because of an editing error, an article on Oct. 12 … described incorrectly the criticisms that many Israelis have voiced about Mr. Netanyahu’s wife, Sara. While her purported temper has been widely faulted, her child-rearing methods have not. Ms. Netanyahu is a respected child psychologist.”

Sources close to the prime minister leaked to Yisrael Hayom that the New York Times bureau chief in Jerusalem, Jodi Rudoren, who had written the article, had sent a letter of apology to Sara Netanyahu.

Netanyahu’s people also leaked excerpts from the letter implying that she was "deeply apologetic," citing "an embarrassing editorial flaw," describing the piece as "outrageous."

I asked Rudoren about the apology. She told me by email that she had initiated the apology after realizing that an error had occurred in the article.

“There was no pressure from PMO," she said, adding that she had initiated the correction as soon as she learned of the error. "I wrote Mrs. Netanyahu a letter of apology."

Rudoren declined to disclose the contents of the letter, saying "I consider its contents to be personal, so I will not address them. The paper's published correction speaks for itself -- there was an editing error that led to the criticism being described improperly…”
Posted by joe levin at 7:04 PM