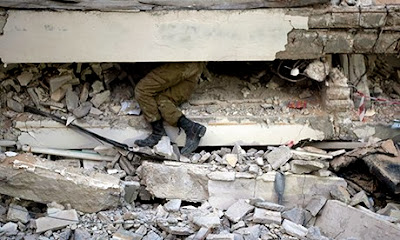 An estimated 7,000 people could be killed, tens of thousands injured and a further 200,000 left homeless if a powerful earthquake struck Israel, a government minister has warned following six separate tremors over the past week.


The home front defence minister, Gilad Erden, told the Israeli parliament this week that national disaster exercises would be held over the coming weeks.

"This is not in response to the recent series of earthquakes, but rather part of our programme of preparation and response in the event of a [major] earthquake," he said.

A public safety campaign in the Israeli media instructed people to leave buildings for open ground in the event of an earthquake.

Five tremors have been recorded in northern Israel and one in Eilat in the south over the past week. All registered between 3 and 3.6 magnitude.

Israel and the Palestinian territories sit on the Great Syrian-African rift, an active faultline. The region has a history of major earthquakes around every 100 years; the last one of serious magnitude was in 1927, in which hundreds of people died near the Dead Sea. Scientists have warned that the area is due for another significant quake.

All new construction in Israel is built to withstand earthquakes and missile attacks, and provide safe rooms and spaces for residents. But office and apartment blocks built before the 1980s are at risk of collapse during a major quake.

Some experts say the recent series of tremors could indicate a significant quake in the relatively near future; others say the tremors release pressure, making a major quake less likely.
Posted by joe levin at 11:35 AM