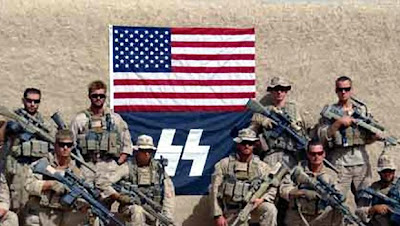 Scout snipers in the Marine Corps shown with a flag bearing an "SS" similar in design to one used in Germany by the SS, a paramlitary force that operated under the Nazi party 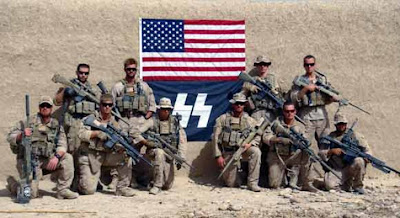 SAN DIEGO - A leading Jewish organization and others outraged by a photo showing Marine snipers in Afghanistan posing with a logo resembling a notorious Nazi symbol are demanding President Obama order an investigation and hold the troops accountable.

The Marine Corps has said it does not plan any discipline because there was no malicious intent. The Marines mistakenly believed the "SS" in the shape of white lightning bolts on the blue flag were a nod to sniper scouts — not members of Adolf Hitler's special unit that murdered millions of Jews, gypsies and others, said Maj. Gabrielle Chapin, a spokeswoman at Camp Pendleton, Calif.

The Marines are no longer with Charlie Company, 1st Reconnaissance Battalion, out of the base north of San Diego, and Chapin said she did not know if they had left the Corps.

Military officials learned of the photograph in November and investigated immediately. It later surfaced on a blog of a military weapons company.

In the September 2010 photo taken in the Sangin district of Helmand province, 10 Marines pose with sniper rifles in front of an American flag above a dark blue flag with the "SS" letters.

Rabbi Marvin Hier, founder of Los Angeles' Simon Wiesenthal Center, said he does not believe it was an innocent mistake and insisted the American public has a right to know what happened.

His organization — one of the largest international Jewish human rights groups with more than 400,000 members — is demanding Mr. Obama and Defense Secretary Leon Panetta launch another investigation and discipline those involved.

"That 70 years after the United States Armed Forces helped liberate Europe from Nazi Germany, to learn that a unit of the United States Marine Corps serving in Afghanistan adopted the SS insignia alongside the Stars and Stripes, desecrates the memory of some 200,000 Americans who gave up their lives to defend freedom against that infamous symbol," he said in a statement.

The Corps has used the incident as a training tool to talk to troops about what symbols are acceptable, Chapin said.

"I don't believe that the Marines involved would have ever used any type of symbol associated with the Nazi Germany military criminal organization that committed mass atrocities in WWII," Chapin said. "It's not within who we are as Marines."

Hier said it clearly shows more training about the Holocaust and the SS unit is needed.

It was the second time this year that images have surfaced showing Marines acting improperly and forcing the Corps to deal with the fallout. Last month, the Pentagon scrambled to contain the damage after an Internet video purportedly showed Marines urinating on Taliban corpses — an act that appears to violate international laws of warfare and further strains U.S.-Afghan relations. Panetta called Afghan President Hamid Karzai to offer assurances of an investigation, and the top Marine general promised an internal probe as well as a criminal one.

Those Marines, like the ones in front of the flag, fought in former Taliban strongholds in Helmand province. They are based at Camp Lejeune, N.C.

Mikey Weinstein of the Military Religious Freedom Foundation, headquartered in Albuquerque, N.M., said the scandals hurt U.S. military missions. His organization sent a letter to the head of the Marine Corps, Gen. James Amos, and Panetta on Thursday calling on them to "condemn this stomach-turning display without equivocation or delay and severely punish all of those responsible."

His organization released another photo showing a Marine and his rifle with the "SS" logo. According to the Marine Corps Times, embedded electronic information in the image shows that it was released by the Corps in 2004 and taken at the Marine Corps Air Ground Combat Center at Twentynine Palms, Calif. Two Marines in it were with a scout sniper platoon.

The newspaper said that suggests the practice is more widespread and that the logo's use is meant to signify "scout sniper," a position exclusive to the Corps. The Army has scouts and snipers, but considers the positions to be separate.

Weinstein said more needs to be done to stop its use.

"This shameful display of SS `lightning bolts' by U.S. service personnel enrages our regional allies, emboldens the extremist Islamist forces with whom we are contending, and eviscerates good order, morale, and discipline within the U.S. Marine Corps," said Weinstein, who founded the advocacy group that calls attention to violations by the military in regards to respecting people of all beliefs.

Thanks to the Internet, the public throughout the wars in Iraq and Afghanistan have witnessed inappropriate behavior by troops photographed or recorded on video in acts ranging from criminal to simply stupid.

Outrage spread instantly in 2004 over the release of photos taken by a group of U.S. military police abusing inmates at the Abu Ghraib prison in Iraq. In 2008, a Marine was kicked out of the service after being videotaped throwing a puppy off a cliff while on patrol in Iraq and joking as the animal yelped.

Master Gunnery Sgt. Mark Oliva, a Camp Pendleton spokesman, said he did not know where the "SS" flag came from but it was likely the property of one of the Marines in the photograph.

"With this getting so much attention, I'm pretty sure every commander is going to be taking a closer look at their Marines and making sure they meet the highest standards of discipline," Oliva said.

The photograph appeared on the blog for a military weapons manufacturer, Knight's Armament, in Titusville, Fla. Spokesman Jon Oxford said the company invites troops to send in photos so customers can see how its weapons are used in the field.

The company removed the photo Thursday because of the media attention, he said.
Posted by joe levin at 2:36 PM