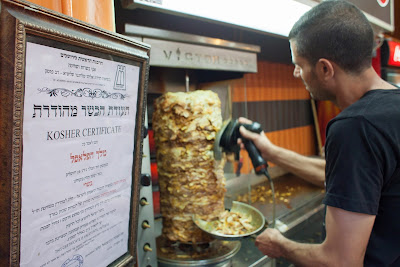 Officials of Israel's Chief Rabbinate are seeking to establish a "kashrut police," in an effort to broaden the authority's power over businesses that present their merchandise as kosher but have no rabbinate-issued kashrut certificate.

In a memorandum of law distributed Sunday in the Knesset, Deputy Religious Services Minister Eli Ben Dahan proposed that the rabbinate's kashrut inspectors be allowed to enter restaurants and businesses, take food samples, and oblige citizens to identify themselves and even be summoned to questioning.

Inspectors of the "kashrut police" - members of the Chief Rabbinate’s Kashrut Fraud Division - would wear identification badges and even uniforms, according to the memorandum.

Officials of Ben Dahan's bureau say the measure is the first step in regulating the kashrut-supervision field in Israel, which is rife with irregularities and lacks transparency. In future stages, Ben Dahan, a certified rabbi and a member of the Habayit Hayehudi party, hopes to sever the dependent relationship between kashrut inspectors and those whom they inspect - the business owners, who currently pay the inspectors' salaries.

The main purpose of the "kashrut police" is to stamp out the incidence of establishments that call themselves kosher, but have no kashrut certificate. In recent years restaurants and cafes in Jerusalem, and, following in their lead, in other cities, began operating without the rabbinate’s kashrut certificates.

The business owners said doing so was an act of protest and disgust over the unreasonable demands made by the rabbinate and its inspectors. Still, these restaurants and cafes remained kosher, sometimes maintaining an even stricter standard of Jewish dietary laws than the regulations require.

The Kashrut Fraud Division slapped steep fines on some of the business owners, even those whose restaurants displayed no certificate on which the word “kosher” appeared, but legal proceedings against the owners stopped at a certain point.

Under Israeli law, business owners may not market their merchandise as kosher, or use the word “kosher” in any form to describe it, unless they have obtained a valid kashrut certificate from the Chief Rabbinate.

Still, the law is not enforced in neighborhoods such as Jerusalem's Mea She’arim, where businesses carry kashrut certificates issued by independent religious courts and private kashrut organizations.

On Sunday, Eli Ben Dahan told Haaretz in a telephone interview that the employees of the Kashrut Fraud Division do not currently have enough tools to enforce the law.

“They go to a place, but they cannot take anything from it or take photographs, and the business owner often throws the inspector out,” he said. “We want to give them the power of inspectors from the Israel Nature and Parks Authority, who, if they see a problem, have the right to take the findings with them and engage in preliminary questioning.”

According to his memorandum, a kashrut inspector wearing a uniform and an identification badge would be permitted to “require any person to give his name and address and show an identification card or other official identifying document; to require any person involved in a case to provide any information or document that ensured he was abiding by the law... to take samples of products and materials and send them for examination... to enter a business or production facility, including places of storage and refrigeration on the premises or under the control of the one being inspected, including entering stationary vehicles, as long as he did not enter a place of residence except by court order.” If the inspector’s suspicions were aroused, he would be permitted to “question any person connected with the aforesaid violation, or who might have knowledge of the violation,” and also to “seize any object connected with the violation.”

This is Eli Ben Dahan’s second move against those wishing to meet the requirements of Jewish law in various spheres without involving the rabbinate.

His first move was to add a clause to the “Tzohar Law” mandating prison terms for Jewish couples who married in private wedding ceremonies without registering with the rabbinate, and those who officiated at such weddings.

In reply to a question about his ministry’s policy, which advocates legislation that would make it difficult for people to abide by religious law without involving the rabbinate, Ben Dahan said, “As you know, I support the state of Israel as a Jewish state, and we need to work toward greater enforcement of the state’s laws. In many spheres there is no law enforcement, and there are many examples of this, such as construction violations that nobody does anything about.

But I, at least, in the small sphere that I deal with, will make sure to enforce the law by which the state is the one to issue kashrut certificates and register marriages, and those who do not obey should be punished.”
Posted by joe levin at 6:58 AM