Michelle and Barack Obama may divorce 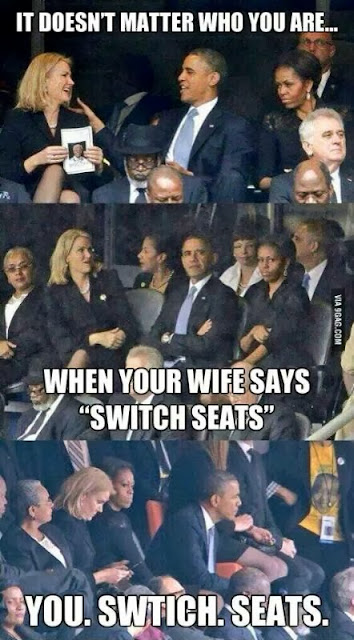 According to a bombshell new report, the First Lady and Barack Obama are sleeping in separate White House bedrooms. She’s preparing to move his clothes and personal things out of their million-dollar house in Chicago. The Voice of Russia writes about this.


"The smart money says the marriage is doomed," a source close to the President said.

"Barack and Michelle have had a rocky go for years and mainly stayed together for their daughters and his political career. But now Michelle is mad as hell. She feels violated in front of the whole world. She’s met with divorce lawyers and told Barack that she wants a life apart from him.

Mi­chelle will stay in the White House for the rest of Barack’s term for ap­pearances’ sake, but she made it clear they’ll be leading separate lives."

Michelle was left furious after her husband was pho­tographed brazenly flirting with Denmark’s female prime min­ister, Helle Thorning-Schmidt, while Michelle was sitting right beside him during the service for former South African president Nelson Mandela.

Obama, 52, laughed and whispered with the 46-year-old Danish beauty throughout the solemn ceremony, at one point cavalierly caressing her shoulder.

"Barack already had enough head­aches with his public approval rating plummeting after the disastrous roll­out of his 'Obamacare' health plan. Now he’s walked smack into the worst marital crisis of his life," said the White House insider.

His female voters have bombarded the White House with letters, phone calls and emails ex­pressing sympathy for the first lady and anger at the President.

Michelle reserved her fury until they were back in their private quarters in the White House. Then she went ballistic behind closed doors and a number of witnesses heard her screaming "I’ve had enough".


Barack has humiliated Mi­chelle before, but this incident was played out on the world stage.
Posted by joe levin at 9:29 PM