A directive on the wall in a Haredi neighborhood 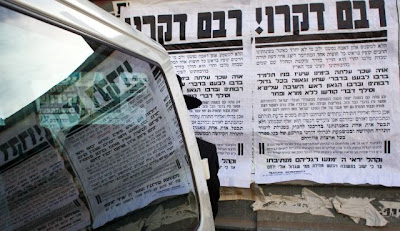 A woman who gave birth alone in her Jerusalem home over the weekend hid the baby under her dress, umbilical cord intact and placenta hidden in a bag next to her bed, and refused to tell anyone about the birth or allow paramedics to examine the baby.


Police and paramedics eventually wrested the infant away from his mother, an ultra-Orthodox woman in her 30s who lives in the Jerusalem neighborhood of Givat Shaul, because they were concerned she was endangering his life.

The woman had refused to tell anyone she had given birth to the baby Saturday morning, while her husband was at synagogue, because she did not want to break her vow of silence.

She had pledged not to speak until Shabbat ended Saturday night.

The couple's rabbi called Hatzalah emergency medical services that afternoon after the father, realizing his wife had given birth, asked for his rabbi's blessing when he went back to synagogue for afternoon prayers.


"When the rabbi asked why, he said his wife had given birth and was sitting at home with the baby," said Ariel Atias, one of the first paramedics to arrive at the scene.

Magen David Adom and Hatzalah paramedics went to the couple's home, but the mother refused to let go of the baby - or to speak.

"The apartment was in a state of extreme neglect," said Magen David Adom paramedic Yoni Hacohen. "We said we must call social services as soon as we entered. ... The couple was sitting in the bedroom and wouldn't let us into the room. I thought it was due to modesty, so I asked a female paramedic to go in there and send the father out. But a few minutes later she came out and said the woman wouldn't communicate with her in any way."

Hacohen and his team entered the room to examine the mother and ascertain whether the baby was alive.

"The mother moved for a moment and I could see the baby was pink, which meant it was alive," he said. "We tried to convince her to let us treat him but she wouldn't say a word."

At the advice of a neighbor, three rabbis were brought in to form an impromptu rabbinical court releasing the woman from her vow of silence. But she still would not speak.

"When I thought the baby's life was endangered, I decided to call the police," said Hacohen.

Two female police officers, one of them a social worker, tried to convince the woman to have the baby examined, but she refused to respond.

Two hours later the police and rescue services decided they were left with little choice but to use force, witnesses said. The police officers held the woman's arms while the paramedics cut the umbilical cord and released the baby, who was rushed with his mother to Jerusalem's Shaare Zedek Medical Center in an ambulance, with a police escort.

By the time they reached the hospital, Shabbat was over and the woman started talking again.

"It's a miracle the baby is safe and healthy," said Atias. "The incident could have ended badly."
Posted by joe levin at 7:00 PM