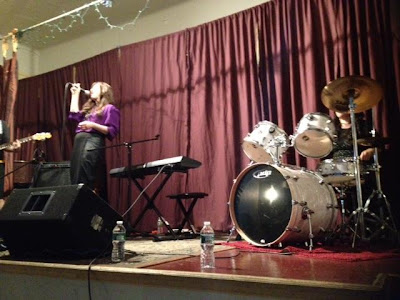 BROOKLYN, NY-- The walls of the concert hall nestled on a small side street in Brooklyn reverberate with the solid beats produced by a five-piece maple wood drum set. Lead singer and songwriter Perl Wolfe's warm voice rises and falls as her fingers dance gracefully across her Yamaha keyboard. The expressions on the faces of the all-female audience exude their intense enjoyment of the performance.


No one would have guessed that here in Park Slope, a Brooklyn neighborhood filled with brownstones, quaint cafés, avid bicyclists, and streets bathed in the shadows of overgrown trees, an all-female Hasidic rock concert was taking place in a below-street-level synagogue-turned-music-café. Perhaps it's less surprising now than it would have been in years past; 2012 has brought with it a new sensationalized curiosity into the lifestyle of Hasidic Judaism, inspired by the likes of crossover artists such as Matisyahu. But even in today's anything-goes environment, the idea of an all-female Hasidic rock n' roll band still manages to raise eyebrows.


With lyrics such as "I followed you all the way down to the top" and "It's better to be outside looking in than to be inside looking out," 25-year-old Wolfe shares some of her deepest feelings and emotions blended with personal experiences and life lessons with her exceptionally diverse audience. Her songs and live performances speak to the souls of her fans, consisting of people across the spectrum of religions, ethnicities, ages and cultural backgrounds, but who have one thing in common: they are all searching for an authentic sound that truly expresses their needs, desires, goals and frustrations, and provides them with much-needed inspiration.

Bulletproof Stockings, whose name is drawn from the tongue-in-cheek description of the opaque tights worn by many ultra-modest Hasidic women, is quite unique in its makeup and message. The percussionist, Dalia G. Shusterman, says the name forms a juxtaposition whose message is meant to celebrate religious Jewish women and womanhood in general, "as well as get a bit of a laugh at a freshly owned inside joke" -- which could appear to be offensive toward the ultra-Orthodox.

"We are not making fun," Wolfe explained to the all-female crowd consisting of both non-Jews and Jews, observant and non-observant, during the opening of a recent concert at Café Bnei in Park Slope, Brooklyn. "We are Hasidic women. Stockings represent femininity. And we, the women, are bulletproof -- a force to be reckoned with. We are going to change the world!" Her declaration was met with resounding applause.


The name connotes an underlying contrast in daily life. "Everything in the world is a contrast, a balance between good and evil, dark and light. Being a Hasidic woman means not just holding on to customs from back in the day, but living in the here-and-now -- bringing those customs into our daily lives to make the world a better place and creating balance, harmony."

Bulletproof Stockings's rock songs, with titles such as "Easy Pray," "Vagabond's Wagon," "Frigid City," "Day By Day," and "Sapphire Reigns," are layered with heavy beats and subtle guitar riffs, accompanying Wolfe's incredibly strong, unwaveringly smooth vocals and keyboard lines. The drums are played by the gifted Shusterman, who started her career as a street performer before advancing to the stages of New Orleans, and then to recording and touring from the bedrock of NYC's indie rock scene (see Hopewell) before making her way to Crown Heights, Brooklyn. The guitar is played by Miriam Brosseau who also performs as part of the Bible-rock band Stereo Sinai.

"It's rare enough to see an all-female band," marveled Maggie, an audience member in her mid-twenties who heard about the show and brought along a group of friends. "They're awesome! And on top of that, the fact that they're Hasidic is very interesting. I go to lots of shows, but I had never been to a show like this. What's great about an all-female audience is that we can support one another and dance however we want."

One of her friends, Meredith, shared her sentiments, adding that what she appreciated most was the personal connection Wolfe made with each individual member of the audience, consisting of females ranging from young teens to middle-aged women.

Hasidic Jewish women and local hipsters alike are drawn to the music and message that Bulletproof Stockings has to offer. Yedida, a mother in her early thirties originally from Los Angeles who moved to the Crown Heights neighborhood of Brooklyn when she became observant a number of years ago, shares her point of view on the fusion of rock and roll with Hasidic Jewish values. "I don't believe that observant Judaism should be an impediment to women expressing their creativity and their talents. I love the unique sound [of Bulletproof Stockings]; it's refreshing. I like that they stand for who they are while expressing their innermost emotions on stage."


Deep in the heart of Brooklyn the Hasids are rockin' out.