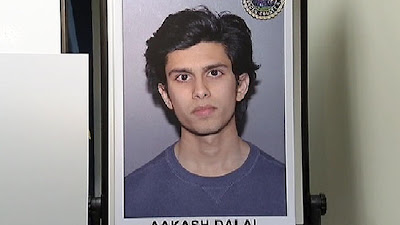 The accused instigator of a series of attacks on New Jersey synagogues was charged Thursday with conspiracy to commit murder for allegedly plotting to kill an assistant prosecutor assigned to his case, authorities said.


Aakash Dalal, 20, of New Brunswick, was arrested in March for his alleged role in the attacks, which included the January firebombing of a house of worship where a rabbi and several family members were sleeping. He has pleaded not guilty.

FBI agents recently began investigating Dalal for allegedly planning to post his $1 million bail and obtain a handgun and kill Assistant Prosecutor Martin Delaney upon his release, said Bergen County Prosecutor John Molinelli. Authorities got a search warrant for his cell Wednesday, where they found evidence of the alleged plot, Molinelli said.

He was also charged with conspiracy to possess a firearm and terroristic threats, and his bail was set at $3 million, in addition to his existing bail of $1 million. He's due in court Friday.

Molinelli has characterized Dalal as an instigator in the January firebombings, allegedly carried out by then-19-year-old Anthony Graziano. Molinelli has said Graziano was motivated by "anti-Jewish animus, a bias against them; an intent to harm them." He hasn't given a motive for Dalal's alleged actions.

Prosecutors say Graziano and Dalal, who both grew up in the northern New Jersey borough of Lodi, were childhood friends.


Graziano has pleaded not guilty to charges including nine counts of attempted murder. He initially was held on $5 million bail but that was later reduced by a judge to $2.5 million. Dalal, who was enrolled last semester at Rutgers University, is also being held on $2.5 million bail.