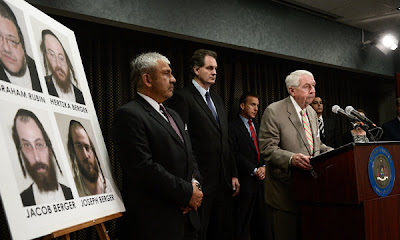 Isn’t it amazing what the glare of a news- media spotlight can do?

Brooklyn DA Joe Hynes — who’s been under fire for years over his questionable handling of child-sex-abuse cases involving the Orthodox Jewish community — has finally seen fit to file charges of witness intimidation.

This is the first time in fully two decades that Hynes has shown the wherewithal to bring a witness-intimidation case involving the politically powerful community.

This, despite the longtime insistence of victim advocates that such intimidation — involving everything from social ostracism in the tight-knit community to bribery to threats of violence — is a key obstacle to prosecuting pedophiles.


In this case, four Hasidic men are charged with offering a $500,000 bribe to a woman to withdraw allegations that a prominent community figure sexually abused her for years, starting when she was only 12.

As part of the arm-twisting, the four also allegedly brought about the removal of the kosher certification for a restaurant run by the woman’s boyfriend.

Hynes has long insisted that bringing such cases is too difficult, given the insular nature of the Orthodox community.

He’s used a similar excuse as the reason he refuses to publicly release the names of even those convicted of sex abuse, saying victims could easily be identified.

Last month, this page suggested that bringing even one successful case that results in a lengthy prison sentence would send a modest, but useful, message.

Within days, Hynes began changing his tune — comparing such intimidation to Mafia tactics and police corruption.

Alas, that prosecution comes as Hynes suffers new embarrassment involving the same community: He’s dropping all charges in a rape case in the face of evidence of prosecutorial misconduct.


Four black men were locked up for 10 months after Hynes — with great public fanfare — charged them with raping and pimping out a young Orthodox girl for nearly a decade.

Then it turned out the head of Hynes’ sex-trafficking unit had failed to turn over a police report that the complainant had recanted some of the allegations. The prosecutor resigned in the wake of questions from an ethics probe.

And his latest actions are as welcome as they are overdue.